It is no secret that, after losing weight, people have a tough time keeping it off.  I mentioned in a previous issue of Weightology Weekly how only 17% of Americans are able to maintain a 10% weight loss after 1 year.  Many people have repeatedly lost weight, only to regain it again and again.  Even celebrities such as Oprah Winfrey struggle, despite having the money to have their own personal trainers and chefs. 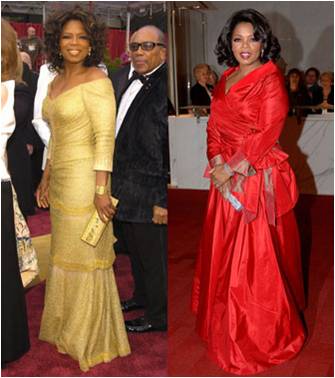 Oprah Winfrey from February to December, 2005

We know that a change in body weight is caused by an imbalance between energy intake and energy expenditure.  We also know that your body tries to resist weight change and correct this energy imbalance.  For example, if you eat 2000 calories per day and suddenly decrease it to 1000, you will lose weight, but you will also get hungry in the process.  This hunger drives you to eat more to bring you back into energy balance.  This is one of the reasons why maintaining long-term weight loss is so difficult.

However, there are two sides to the concept of energy balance.  There is not only food intake, but there is energy expenditure as well.  Your body can resist a negative energy balance by not only making you more hungry, but by decreasing the number of calories you burn.  The extent to which this happens in humans is not clear.  The challenge of successful long-term weight loss could be partly because our bodies reduce their energy expenditure to the point that it makes it very easy to regain the weight.

To further investigate this issue, we first need to discuss what comprises the total number of calories you burn each day.  Your daily energy expenditure consists of 3 components:

Components of Daily Energy Expenditure in a Sedentary Person

Components of daily energy expenditure in a physically active person

Does Energy Expenditure Change in Response to Weight Loss?

Now that we know what comprises energy expenditure, we need to look at how it responds to food restriction and weight loss.  In animals, food restriction and weight loss cause a decrease in REE.  However, there is an increase in spontaneous activity, likely due to stimulation of food-seeking behavior in the animal.  Given that food is plentiful in human society and food-seeking behavior is not necessary, we cannot apply this animal data to humans.

Research has looked at how energy expenditure is affected by weight loss in humans.  We know that weight loss will decrease energy expenditure from the simple fact that you have less weight to move around.  However, the question is whether the decrease in energy expenditure is proportional to the weight lost, or if it is greater than what you would expect given the weight lost.  If the decrease is greater than what you would expect, then that means your body is adapting to the weight loss and trying to conserve energy.  In other words, you become more efficient.  In terms of organ function and REE, you expend less calories for the same function.  In terms of AEE, you either move less, or you expend less calories for the same movement.

To get a better handle on how long-term weight loss will impact energy expenditure, and whether adaptive thermogenesis occurs in humans, Rudolph Leibel, a well-known researcher in metabolism and weight loss, and his colleagues performed a study on people who had lost at least 10% of their weight and kept it off for more than a year.  The researchers examined 7 trios of subjects.  Each trio consisted of the following:

The subjects were matched for sex, meaning that each trio would contain all males or all females.  They were also matched for weight, meaning that the subjects in a particular trio had similar body weights.  The subjects lived in the clinical research center throughout the study.  They were fed only a liquid formula diet, which contained 40% fat, 45% carbohydrate, and 15% protein.  Their caloric intake was adjusted until weight stability was achieved.  A stable weight was defined as a daily weight fluctuation of less than 10 grams for at least 2 weeks.  The formula diet was important, as a mixed food diet can cause random shifts in weight due to shifts in salt and carbohydrate intake (which is another limitation of previous research in this area).  Thus, diet and weight were precisely controlled.  Since weight was stable, 24-hour energy expenditure had to match 24-hour energy intake.  Thus, the subjects’ calorie intake would also indicate the number of calories they were burning each day.  REE was measured under a metabolic hood.  TEF was measured by feeding the subjects when they were under the hood, and measuring the increase in metabolic rate.  AEE was calculated by subtracting REE and TEF from total daily energy expenditure.  Body composition was measured using hydrostatic weighing.

The following chart shows the average energy expenditures of the subjects: 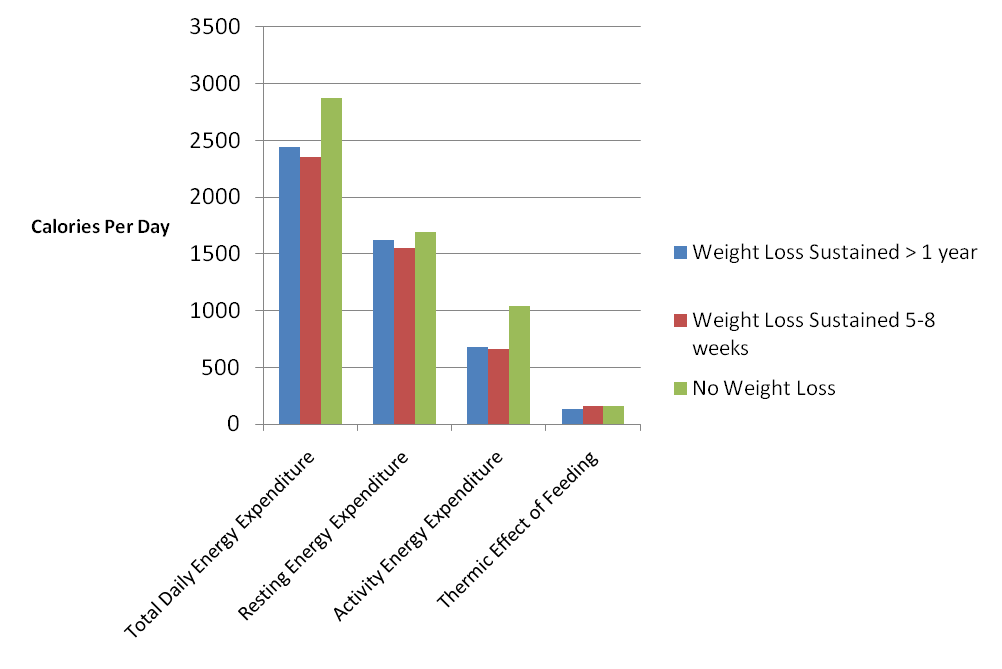 When the observed energy expenditures were compared to the values predicted by the equations, the results were similar: 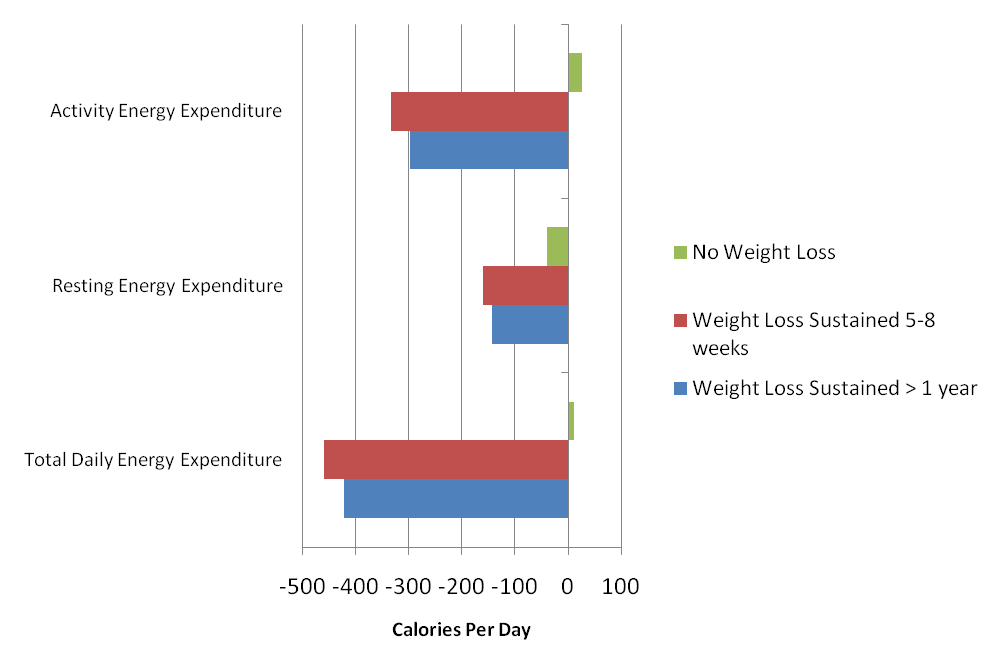 The main reason why we have a greater-than-expected decrease in energy expenditure with weight loss is because we become less active.  This doesn’t mean we exercise less, either, as exercise is a conscious choice.  It means we unconsciously reduce our NEAT and spontaneous activity.  It also means we become more efficient in the activity we do; we expend less calories for the same movement.  In fact, 35% of the decrease in activity energy expenditure can be attributed to an increase in efficiency.  Overall, we move around less, and we become more efficient at the movements we perform.  Combined with a decrease in resting metabolic rate, we end up burning over 400 calories per day less than you would expect for someone of our same height, weight, gender, and body composition.  This is not only why weight loss eventually plateaus, but also why weight is so easily regained.

Other research has verified that NEAT and physical activity decrease with weight loss, and that they are the primary drivers behind why energy expenditure decreases more than you would expect.  In one study, obese subjects lost 23.2% of their body weight.  Total daily energy expenditure was 75.7% of what you would predict, and nearly all of the energy savings were due to a decrease in activity rather than a decrease in metabolism.  In fact, the decrease in activity amounted to 582 calories per day!

The good news is that, since the reductions in energy expenditure are primarily due to decreases in activity, one can make conscious choices to increase physical activity to a sufficient extent to prevent weight regain.  Research has demonstrated that high physical activity levels can help with maintenance of weight loss.  In one study, subjects who exercised enough to expend 1000 calories per week regained most of their weight, but subjects who expended 2500 calories per week maintained most of their weight loss.  Similar results have been observed in other studies.  Subjects in the National Weight Control Registry, a database of individuals who have maintained at least a 30 pound weight loss for over a year, expend an average of 2620 calories per week in physical activity.

Remember that physical activity doesn’t have to include formal exercise.  NEAT makes up the majority of your activity energy expenditure, and thus has the greatest ability to impact it.  In fact, walking at only 1 mile per hour will double your energy expenditure over sitting.  Thus, anything that you can do to accumulate physical activity throughout the day will dramatically improve your chances of maintaining weight loss over the long haul.  Even small things, like parking a car further away from a destination, or taking stairs rather than an elevator, can add up if accumulated throughout the day.  But because activity can decrease on an almost unconscious level, you need to make a deliberate conscious effort to get as much activity as possible in throughout your day, every day.