Periodization / Variation in Repetition Ranges for Muscle Size: Your Complete Evidence Based Guide

This article was originally published in my Research Review where I keep you up to date every month with the latest research on muscle gain and fat loss. Click here to learn more. For some more free sample content before you buy, sign up for my newsletter.

Maximizing muscle growth means manipulating your training variables to create the best stimulus possible.  These variables include volume, frequency, intensity, rest intervals, and others.  Periodization refers to the programmed manipulation of training variables in a systematic fashion to help maximize adaptations.  In the world of weight training and building muscle, periodization often is synonymous with varying your repetition ranges and loads over a specific time frame.  In this evidence based review, I’ll go over the theoretical reasons why varying your rep ranges may, or may not, help you build muscle.  I’ll then look at studies that have specifically addressed this question.  As with other Weightology evidence-based reviews, you’ll come away with a set of principles that you can practically apply to your own training or that of your clients.

The Theoretical Case for Varying Your Rep Ranges

Heavy load training is superior to light load training for improving strength.  This is because heavier loads result in greater neural adaptations (i.e., adaptations in your nervous system that allow you to generate more force, with no change in muscle size).  This would imply that use of heavy loads can lead to greater strength gains over time, which, in turn, would allow for greater volume loads over time.  Because of the relationship between volume load and hypertrophy, this would theoretically enhance muscle gains over an extended period.

Interestingly, though, it’s been shown that light load training results in greater increases in volume load over time compared to heavier loads.  This, theoretically, would enhance muscle gains over time due to the accumulated volume.  Given the impact of heavy loads on strength, and the impact of light loads on load volume over time, it would make sense that, to optimize hypertrophy, you would combine heavy and light loads in your training plan.

The Theoretical Case for “It Doesn’t Matter”

Finally, as long as sets are taken to muscular failure or near failure, muscle fiber recruitment is likely similar between heavy loads and light loads. In fact, recent research by Robert Morton and colleagues corroborates this. In this study, the scientists compared muscle glycogen (a carbohydrate stored in your muscles that fuels resistance exercise) depletion in fast and slow twitch muscle fibers when heavy loads (80% 1-RM) were taken to failure compared to light loads (30% 1-RM) taken to failure. Depletion of glycogen was similar between the heavy and light loads, indicating the two loading schemes resulted in similar recruitment of slow twitch and fast twitch fibers.

Changes in molecular anabolic signaling were also similar between the conditions.

There was also a significant correlation between fast twitch and slow twitch muscle fiber glycogen depletion and p70S6k phosphorylation (a marker of anabolic signaling), indicating the recruitment and fatigue in these fibers was related to the anabolic stimulus.

As of the latest update to this article, there are 6 studies that fit these criteria.  Let’s take a look at them.

A Closer Look at the Schoenfeld Study

Let’s take a closer look at that last study that I was involved in.  The average changes in the arm muscles favored the varied group, but it was not statistically significant.  This could mean one of two things:

In a situation like this, it can be useful to look at a scatterplot of the individual changes.  This will help us get a better idea of whether there’s a true tendency for varied reps to do better, or if this is all just random variance.  Most studies don’t present individual results, but given that I was the one who analyzed the data in this study, I have access to that data.  Thus, I’m presenting the individual results to you, and you won’t find this information anywhere else.

Let’s take a look at the tricep muscles first.  Here’s a graph of the individual results.  Each circle represents the change in an individual, and the horizontal bar represents the average change. 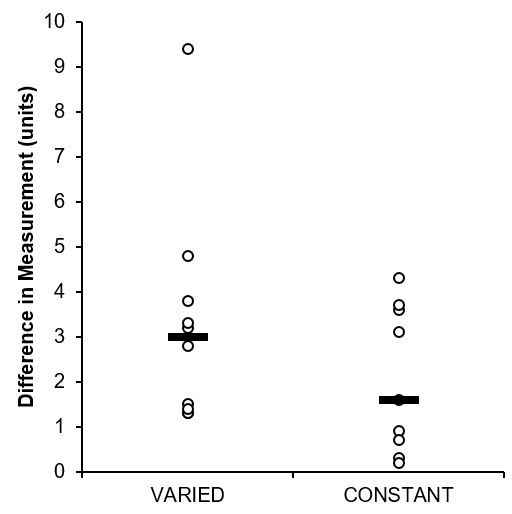 These results would suggest a benefit to varied rep training, but we need to look at the other muscle groups.  If there’s no clear benefit in the other muscle groups, then this would suggest that the tricep results are a product of random variance (or that only the triceps benefit from varied rep training, but I cannot think of any physiological rationale why this would be the case).  Here’s the results for the biceps.

In this case, there’s clearly an outlier in the constant group who barely had any change.  Otherwise, the distribution of the results is fairly similar.  This is confirmed when we remove the outlier. 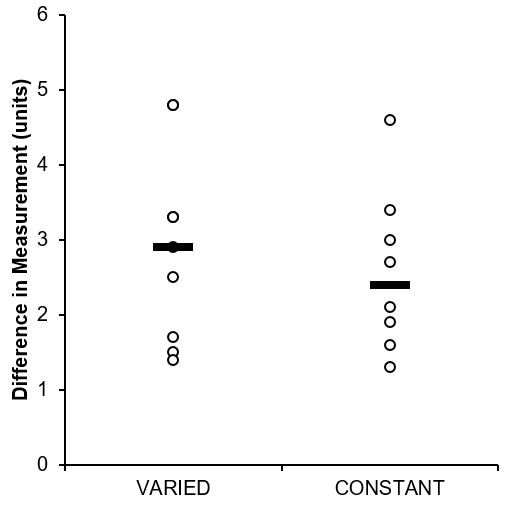 This would suggest no real benefit of varied rep training over constant rep training.  Finally, let’s take a look at the quadriceps results.  Percentage gains were similar between the groups for the vastus lateralis.  Here’s the individual results.

Overall, there is no clear difference between the two groups.  Thus, in 2 out of the 3 muscles analyzed in this study, there is not a clear benefit of varying your rep range.  In all likelihood, the tricep results are a product of random variance.  Therefore, there does not appear to be an apparent benefit to varying your rep range for hypertrophy after closer inspection of this study.

In an 8-week, well-designed study, Damas and colleagues compared constant rep training (8 sets of 9-12 RM) to a varied program in trained men. This was a within-subjects study design, where one leg was trained with the constant rep program, and the other leg was trained with the varied program. This means each subject is compared to himself, which helps remove any potential effects of genetic variability from the results. The constant rep program involved 4 sets of leg press and 4 sets of leg extension performed twice per week. Repetition range was 9-12 reps to failure and rest intervals were 2 minutes. In the varied program, each training session was varied among the following four different protocols:

The results showed that the change in muscle size was practically identical between the conditions. 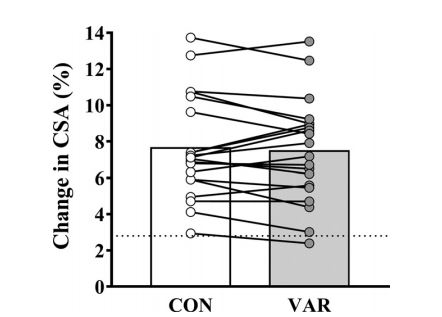 The difference is even smaller when we look at the combined 48-hour difference in muscle protein synthesis. Such a small difference would unlikely to have any noticeable impact on muscle hypertrophy.

One limitation of this study is that the varied group only varied rep range in some of the training sessions, so it can’t give us a truly full picture of what might happen if repetition range was the only variable that was manipulated over an extended period of time. However, given the very small size of the difference in muscle protein synthesis, the lack of differences in hypertrophy observed in other studies that varied rep ranges, the lack of impact of other variations in this particular study, and the similar fiber recruitment/muscle glycogen depletion between moderate and high rep sets taken to failure, it seems unlikely that variation in the rep range between moderate and high reps will have any noticeable impact on hypertrophy.

Putting It All Together 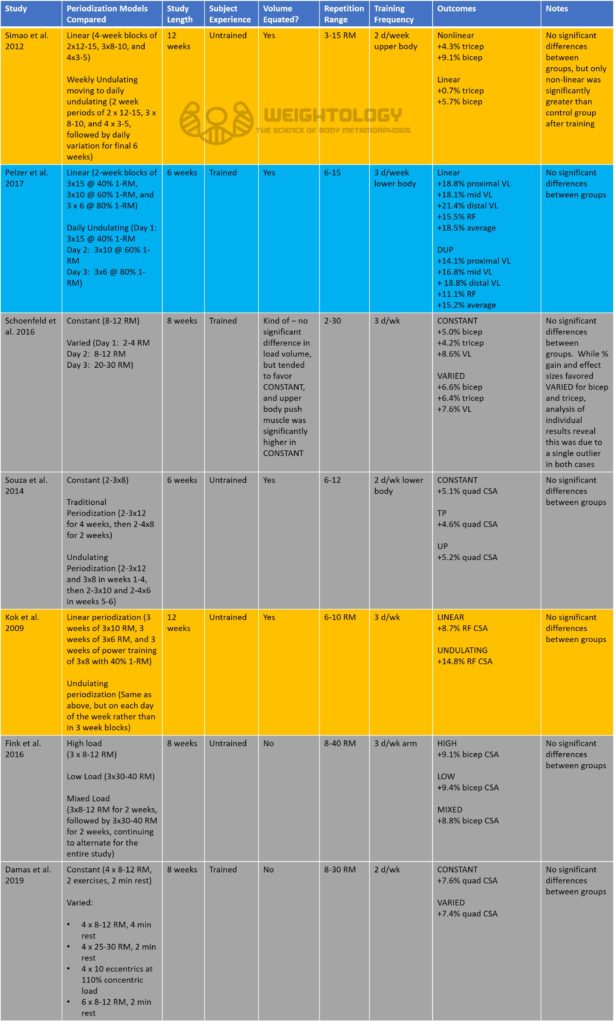 Looking at the overall weight of the evidence, 4 studies show no apparent benefit, one shows a slight edge to linear/block periodization over frequent variation, and 2 studies show an edge to undulating periodization over linear/block periodization.  With 4 studies showing no benefit, 2 showing an edge one way, and 1 showing an edge the other, the weight of the evidence would indicate no clear hypertrophy benefit to frequent variation or periodization in your repetition ranges over more constant schemes.  Now, these studies are over 6-12 week periods; it’s possible that there could be a benefit over longer time frames, but if there is a benefit, the benefit is likely small.

Now, this conclusion is based on one caveat…that you’re training with sufficient volume to induce hypertrophy in the first place.  Two of these studies tended to show inferior results for linear periodization schemes, where you can end up with extended blocks of low volume/high load training.  It should be noted that these results are supported by a meta-analysis comparing muscle gains between linear and daily undulating periodization schemes, which I have reviewed here in Weightology.  This meta-analysis found no significant differences in muscle gains between LP and DUP when you controlled for training volume.  However, the effect size difference and confidence interval were skewed towards DUP. 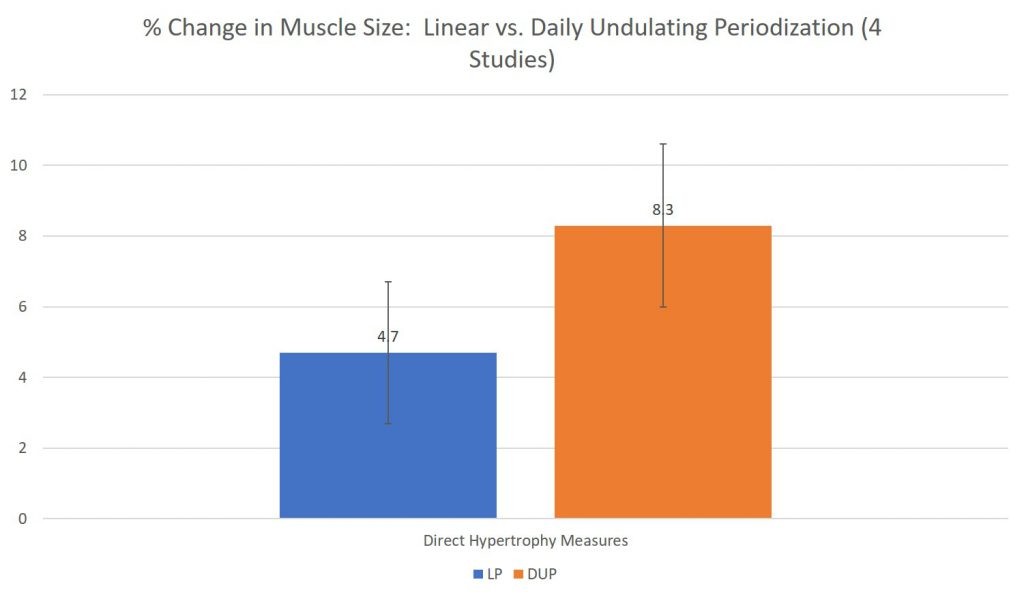 This is also similar to an older study by Baker et al. (1994), who found that, in a linear periodization model, gains in lean mass stopped when the subjects hit the low volume/high load phase of their training.  This phase involved 3 sets of 3 reps on core exercises and 3 sets of 6 reps on assistance exercises.  Here’s a graph of the lean mass gains for the different groups in this study. 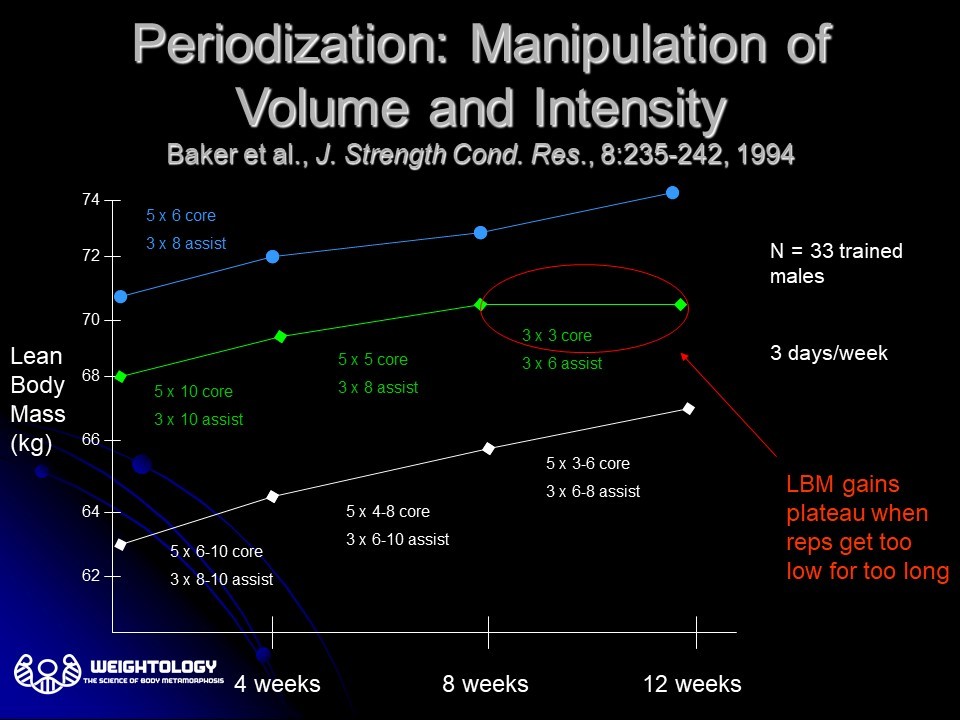 While there may not be a hypertrophy benefit to varying your rep ranges over using a constant rep range, that’s not to say there are not other benefits.  Incorporating high rep/low weight rep ranges in your training can give your joints a break and reduce injury risk, which, in turn, will help with maintaining your training consistency.  Also, varying your repetition range can make training more psychologically interesting, which can help with motivation and reduce feelings of staleness.