I feel sorry for insulin.  Insulin has been bullied and beaten up.  It has been cast as an evil hormone that should be shunned.  However, insulin doesn’t deserve the treatment it has received.

Insulin is a hormone that regulates the levels of sugar in your blood.  When you eat a meal, the carbohydrate in the meal is broken down into glucose (a sugar used as energy by your cells).  The glucose enters your blood.  Your pancreas senses the rising glucose and releases insulin.  Insulin allows the glucose to enter your liver, muscle, and fat cells.  Once your blood glucose starts to come back down, insulin levels come back down too.  This cycle happens throughout the day.  You eat a meal, glucose goes up, insulin goes up, glucose goes down, and insulin goes down.  Insulin levels are typically lowest in the early morning since it’s usually been at least 8 hours after your last meal.

Insulin doesn’t just regulate blood sugar.  It has other effects as well.  For example, it stimulates your muscles to build new protein (a process called protein synthesis).  It also inhibits lipolysis (the breakdown of fat) and stimulates lipogenesis (the creation of fat).

It is the latter effect by which insulin has gotten its bad reputation.  Because carbohydrate stimulates your body to release insulin, it has caused some people to argue that a diet high in carbohydrate will cause you to gain fat.  Their reasoning, in a nutshell, goes like this:

Using this same logic, they argue that a low carbohydrate diet is best for fat loss, because insulin levels are kept low.  Their logic chain goes something like this:

However, this logic is based on many myths.  Let’s look at many of the myths surrounding insulin.

FACT:Insulin Is Only Elevated During the Time After a Meal In Healthy Individuals

One misconception regarding a high carbohydrate intake is that it will lead to chronically high insulin levels, meaning you will gain fat because lipogenesis will constantly exceed lipolysis (remember that fat gain can only occur if the rate of lipogenesis exceeds the rate of lipolysis).  However, in healthy people, insulin only goes up in response to meals.  This means that lipogenesis will only exceed lipolysis during the hours after a meal (known as the postprandial period).  During times when you are fasting (such as extended times between meals, or when you are asleep), lipolysis will exceed lipogenesis (meaning you are burning fat).  Over a 24-hour period, it will all balance out (assuming your are not consuming more calories than you are expending), meaning you do not gain weight.  Here’s a graph showing how this works:

After meals, fat is deposited with the help of insulin. However, between meals and during sleep, fat is lost. Fat balance will be zero over a 24-hour period if energy intake matches energy expenditure.

This is just a rough chart that I made, but the green area represents the lipogenesis occuring in response to a meal.  The blue area represents lipolysis occuring in response to fasting between meals and during sleep.  Over a 24-hour period, these will be balanced assuming you are not consuming more calories than you expend.  This is true even if carbohydrate intake is high.  In fact, there are populations that consume high carbohydrate diets and do not have high obesity rates, such as the traditional diet of the Okinawans.  Also, if energy intake is lower than energy expenditure, a high carbohydrate diet will result in weight loss just as any other diet.

FACT:  Your Body Can Synthesize and Store Fat Even When Insulin Is Low

One of the biggest misconceptions regarding insulin is that it’s needed for fat storage.  It isn’t.  Your body has ways to store and retain fat even when insulin is low.  For example, there is an enzyme in your fat cells called hormone-sensitive lipase (HSL).  HSL helps break down fat.  Insulin suppresses the activity of HSL, and thus suppresses the breakdown of fat.  This has caused people to point fingers at carbohydrate for causing fat gain.

However, fat will also suppress HSL even when insulin levels are low.  This means you will be unable to lose fat even when carbohydrate intake is low, if you are overeating on calories.  If you ate no carbohydrate but 5,000 calories of fat, you would still be unable to lose fat even though insulin would not be elevated.  This would be because the high fat intake would suppress HSL.  This also means that, if you’re on a low carbohydrate diet, you still need to eat less calories than you expend to lose weight.

It is a well known fact that insulin acutely suppresses appetite.  This has been demonstrated in dozens and dozens of experiments.  This will be important when we talk about the next misconception…

FACT:  Protein Is a Potent Stimulator of Insulin Too 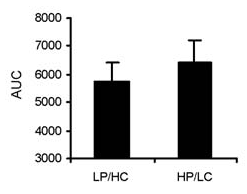 Now here’s a chart of the blood sugar response: 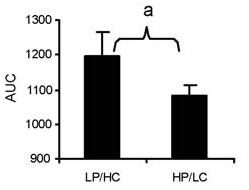 Some people might argue that the “low-carb” condition wasn’t really low carb because it had 75 grams of carbohydrate.  But that’s not the point.  The point is that the high-carb condition had nearly TWICE as much carbohydrate, along with a HIGHER glucose response, yet insulin secretion was slightly LOWER.  The protein was just as powerful at stimulating insulin as the carbohydrate.

I can also hear arguments coming like, “Yeah, but the insulin response is longer and more drawn out with protein.”  That wasn’t true in this study either. 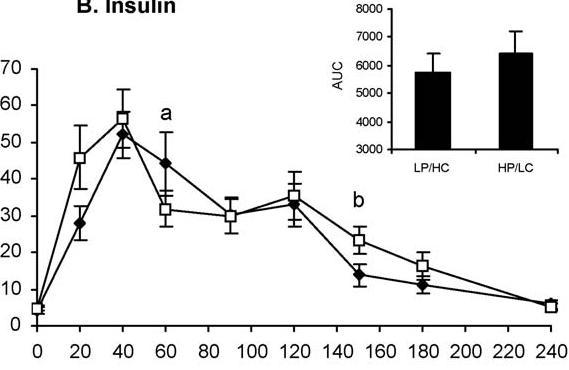 You can see in the chart that there was a trend for insulin to peak faster with the high protein condition, with a mean response of 45 uU/mL at 20 minutes after the meal, versus around 30 uU/mL in the high carb condition.

Comparison of low protein, high carb and high protein, low carb meals and their effects on hunger and fullness

Here’s the results of another study that compared the effects of 4 different types of protein on the insulin response to a meal.   This study was interesting because they made milkshakes out of the different proteins (tuna shakes????  YUCK!!!!!  Of course some people may remember the tuna shake recipes from the misc.fitness.weights days).  The shakes contained only 11 grams of carbohydrate, and 51 grams of protein.  Here’s the insulin response to the different shakes: 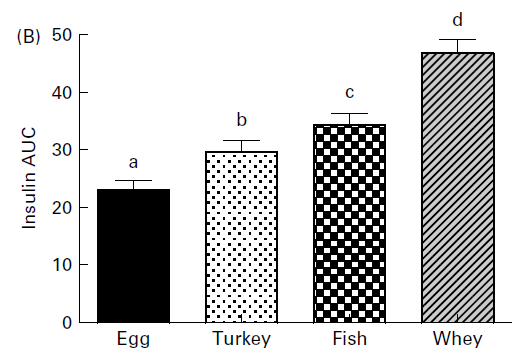 Now, some might argue that the response is due to gluconeogenesis (a process by which your liver converts protein to glucose).  The thought is that the protein will be converted to glucose, which will then raise insulin levels.  As I mentioned earlier, people will claim that this will result in a much slower, more drawn-out insulin response, since it takes time for your liver to turn protein into glucose.  However, that’s not the case, because the insulin response was rapid, peaking within 30 minutes and coming back down quickly at 60 minutes: 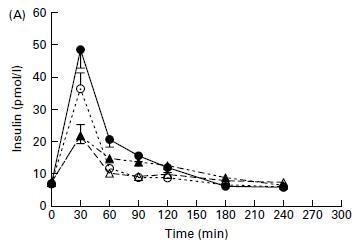 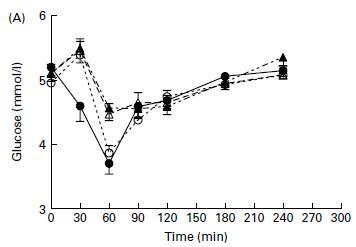 The insulin response was associated with appetite suppression.  In fact, the whey protein, which had the highest insulin response, caused the greatest suppression of appetite.  Here’s a chart showing the calorie intake of the subjects when they ate lunch 4 hours after drinking the shake: 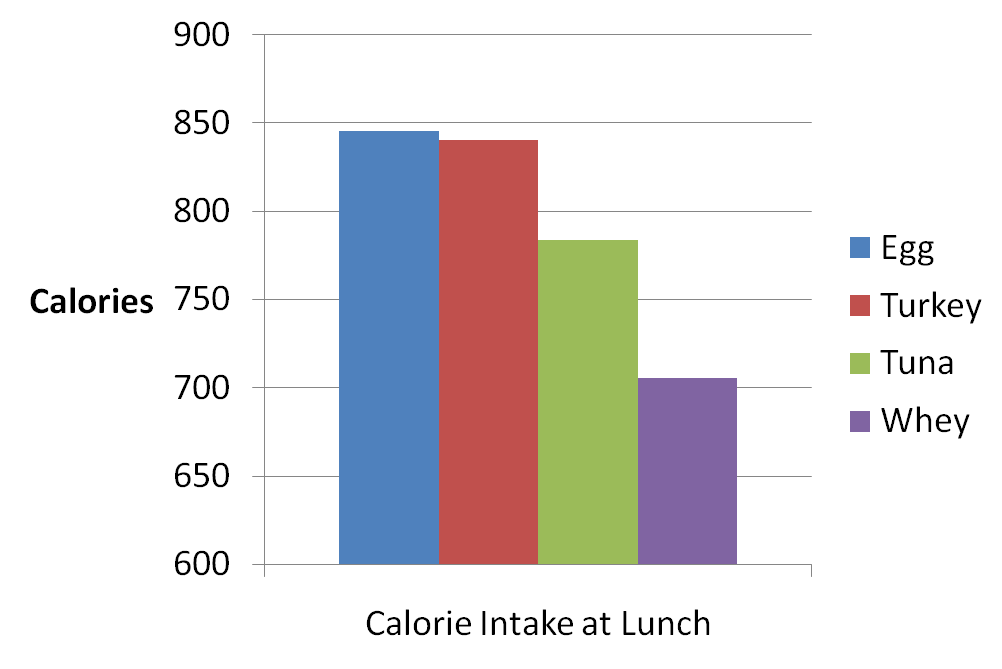 The subjects ate nearly 150 calories less at lunch when they had whey protein, which also caused the greatest insulin response.  In fact, there was an extremely strong inverse correlation between insulin and food intake (a correlation of -0.93).

Here’s data from another study that looked at the insulin response to a meal that contained 485 calories, 102 grams of protein, 18 grams of carbohydrate, and almost no fat: 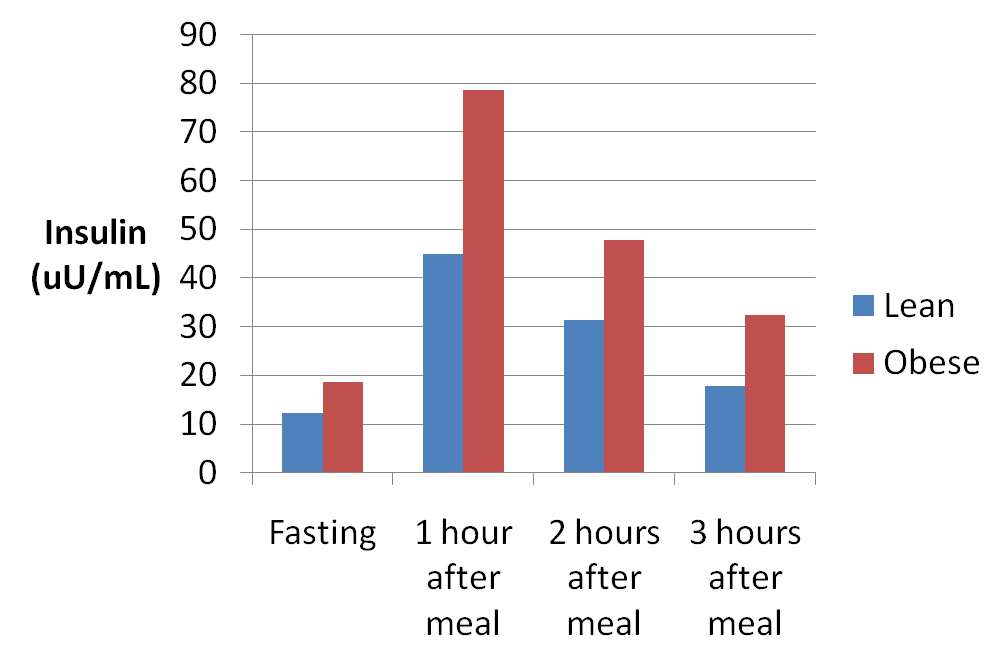 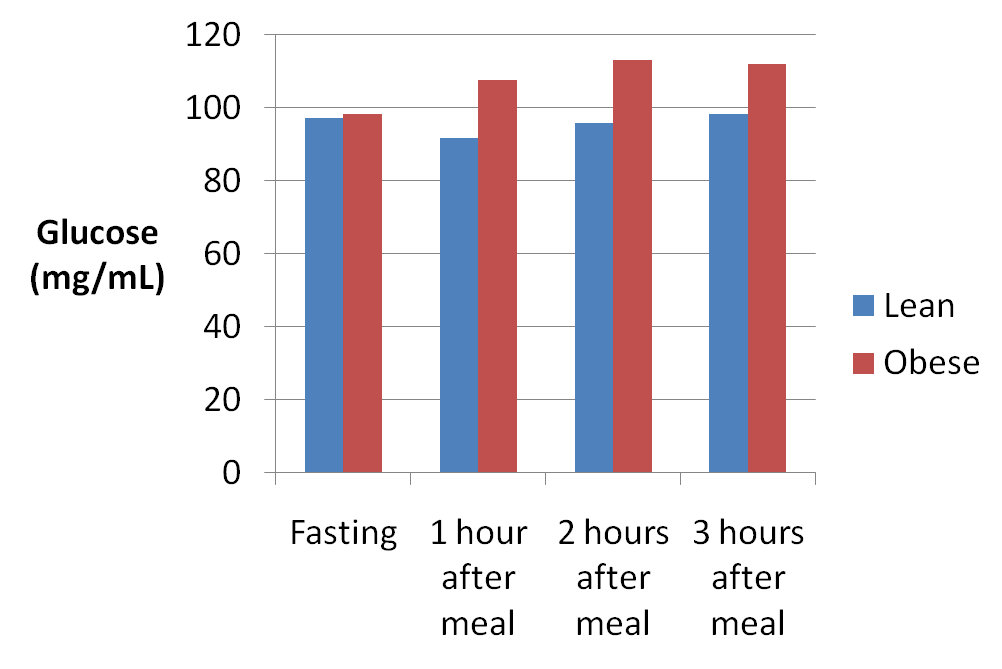 Blood glucose response in response to a high protein, low carb meal in lean and obese

So how can protein cause rapid rises in insulin, as shown in the whey protein study earlier?  Amino acids (the building blocks of protein) can directly stimulate your pancreas to produce insulin, without having to be converted to glucose first.  For example, the amino acid leucine directly stimulates pancreas cells to produce insulin, and there’s a direct dose-response relationship (i.e., the more leucine, the more insulin is produced).

Some might say, “Well, sure, protein causes insulin secretion, but this won’t suppress fat-burning because it also causes glucagon secretion, which counteracts insulin’s effects.”  I mentioned earlier how insulin will suppress lipolysis.  Well, some people think that glucagon increases lipolysis to cancel this out.

It should be remembered why glucagon is released in response to protein in the first place.  Since protein stimulates insulin secretion, it would cause a rapid drop in blood glucose if no carbohydrate is consumed with the protein.   Glucagon prevents this rapid drop in blood sugar by stimulating the liver to produce glucose.

Insulin:  Not Such a Villain After All

The fact is that insulin is not this terrible, fat-producing hormone that must be kept as low as possible.  It is an important hormone for appetite and blood sugar regulation.  In fact, if you truly wanted to keep insulin as low as possible, then you wouldn’t eat a high protein diet…you would eat a low protein, low carbohydrate, high fat diet.  However, I don’t see anybody recommending that.

I’m sure some are having some cognitive dissonance reading this article right now.  I know because I experienced the same disbelief years ago when I first discovered this paper and how protein caused large insulin responses.  At the time, I had the same belief that others have…that insulin had to be kept under control and as low as possible, and that spikes in insulin were a bad thing.  I had difficulty reconciling that study and my beliefs regarding insulin.  However, as time went on, and as I read more research, I learned that my beliefs regarding insulin were simply wrong.

The bottom line is that insulin doesn’t deserve the bad reputation it’s been given.  It’s one of the main reasons why protein helps reduce hunger.  You will get insulin spikes even on a low-carb, high-protein diet.  Rather than worrying about insulin, you should worry about whatever diet works the best for you in regards to satiety and sustainability.  As mentioned in a previous article, individual responses to particular diets are highly variable and what works for one person will not necessarily work for another.  I will be writing a post in the future on the need for individualized approaches to nutrition.

Click here to read part 2 of this series on insulin.