In part 1 of this series, I told you how the only true way to measure body fat is to kill you, strip off of the fat, and weigh it.  All of the methods available for live people are nothing more than predictions, predictions with sizeable errors.  Now you will learn just how big the errors are, and where they come from.

Most body fat estimation techniques are based on a two compartment model.  This means we divide your body into two components:  fat, and fat-free mass.  Fat-free mass includes everything that is not fat; this means it includes your organs, muscle, bone, and body water.  This is where many people make a mistake; they see their fat-free mass change, and they assume it was a change in muscle.  However, we aren’t estimating muscle with a two-compartment model; we are estimating anything that isn’t fat.  A simple change in body water will appear as a change in fat-free mass.  So you always need to be careful and avoid equating fat-free mass and muscle.

Underwater, or hydrostatic, weighing has long been considered the “gold standard” of two compartment models. 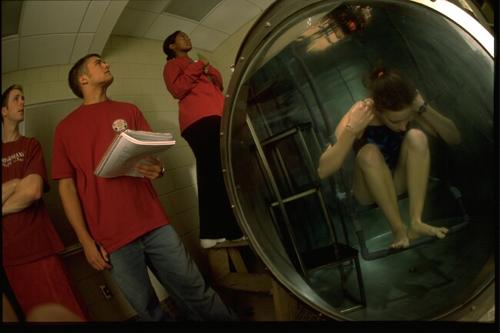 This is where we weigh you in an underwater tank, while simultaneously measuring the amount of water you displace (which gives us your body volume, or the amount of space your body takes up).  Fat-free mass is more dense than fat; it weighs more for a given volume.  Second, fat tends to float in water, while fat-free mass tends to sink.  We use these principles to caculate your body density.  From this number, we can estimate your fat and fat-free mass.  The Bod Pod is based on a similar principle, except we determine how much air you displace, rather than water.

Anyone who has been weighed underwater will tell you that it’s not a very comfortable process.  You have to get in a swimsuit, get as much air as possible out of your swimsuit when in the water, get as much air bubbles as possible off of your skin, blow out as much air as possible, and then submerge underwater while sitting on a “swing”.  You have to remain steady as the person takes the measurement.  You will often need to repeat this numerous times to get a decent measurement.  A lot of things can contribute to error in the measurement, such as not successfully blowing out all the air in your lungs, or having air bubbles trapped in your hair.

Even under absolutely perfect circumstances, there are still sources of error.  You have to estimate the amount of air that is still present in your digestive tract (which will contribute to how much you float).  Your lungs always have a certain amount of air left in them (known as residual volume); otherwise they would collapse.  While we can directly measure this residual volume, most of the time it is estimated.  This also contributes to how much you float in the water, which contributes to error.

However, the biggest source of error is where we convert body density into a body fat percentage.  Most often we use the Siri Equation to do this.  This equation assumes that fat-free mass has a certain density.  However, research has shown that the density of fat-free mass can change depending upon your ethnicity.   This means that the amount of error is affected by whether you are Caucasian, African-American, Native American, or some other ethnicity.  Not only that, but a simple change in your body weight can also change the density of your fat-free mass.  This means that weight loss or weight gain contributes to error; this is a problem if you are trying to measure change over time.  This also means that things such as your hydration status can change the outcome of the final number.

Basically, the whole two compartment model has significant potential for error because of the assumptions made about the density of fat-free mass.  So how much error are we talking about here?  To answer that question, we need a standard against which we can compare underwater weighing.  Since we can’t kill people, we need something else.  Enter the four compartment model.  This is where we divide the body into 4 components:  mineral, water, fat, and protein.  This model has an advantage over the two compartment model because it avoids the assumptions about the density of fat-free mass.  It involves measuring body density with underwater weighing or the Bod Pod, total body water using a technique called deuterium dilution, and bone mineral content using DEXA.  Equations are then used to get the estimates for the four components.  A four compartment model is very expensive and isn’t available to your average Joe; it’s only used in research studies.  While the results are still an estimate, it is by far the best estimate that can be made in a live person.  The four compartment model is the gold standard against which all other techniques should be judged.

Small Error For Populations, Not Individuals

So how does underwater weighing compare to the 4-compartment model?  This is where you have to differentiate between how good something is on average, and how good it is in individuals.  A technique could give you a 0% error rate on average, but half the people could have a +10% error and the other half could have -10% error.

The research shows that underwater weighing has pretty low errors on average, when compared to 4-compartment models.  On average, underwater weighing underpredicts (meaning it gives you lower body fat percentages than a 4-compartment model) body fat percentage by 0.1 to 1.2%, although one study showed an overprediction in young women of 2.1%.  Overall, that’s pretty good.  Of course, that depends on whether you use the right equation for your ethnicity.  The Siri equation I mentioned earlier only applies to Caucasians.  In one study on black female athletes, the average error increased to 2.6% when an equation developed for whites was used, versus an error of only 0.5% when an equation developed for blacks was used.

Now, when we start looking at individuals, the error gets significantly higher.  The individual error rate can get as high as nearly 5-6%.  So let’s say you have your body fat tested via underwater weighing, and it comes out to be 20%.  However, your true body fat could be as low as 15% or as high as 25%.  That is a huge range, and it is impossible to know how good your number really is.

We also run into problems when trying to track body fat changes over time.  Earlier I mentioned how weight change can alter the density of fat-free mass, which will throw off the accuracy of a method that has pretty rough accuracy in the first place.  Researchers have looked at the accuracy of underwater weighing for assessing body fat change in individuals, and the results aren’t pretty.  Here’s a chart from one study:

The bottom line is that underwater weighing can give good results when looking at group averages, but not so good results when looking at individuals.  The sad thing is that underwater weighing is actually the best method out of the 2-compartment models.  Other methods, including the Bod Pod, BIA, and skinfolds, are significantly worse.  Click here to read Parts 3 and 4 of this series and learn about the Bod Pod and BIA…