Slow down, you eat too fast

You got to make your meal last

Just wolfin’ down your meal at home

Lookin for food and feelin’ hungry

– Sung to the tune of “Feelin’ Groovy” by Simon & Garfunkel

We are often told that we should eat more slowly to feel more full.  But is this an old wives’ tale, or is there something to this?  Observational data does indicate that eating more quickly is associated with higher body weights in children and in adults.  In fact, in one study on Japanese adults, people who ate quickly had 84-109% greater odds of being overweight.  However, observational studies cannot establish cause and effect.  It could be that eating fast is only associated with being overweight.  Nevertheless, a cause and effect relationship is plausible.  It makes intuitive sense that the faster you eat, the more you’ll eat before your gut signals your brain that you’re full.  But the question is whether this is actually true.  Fortunately, research is starting to emerge that has investigated the effect of eating rate on satiety signals, and the evidence is starting to support the idea that eating more slowly may in fact help you eat less.

As I pointed out in a past blog post, hunger and satiety are regulated by a complex interaction of many hormones and signals between your gut and your brain.  Three key hormones that are involved in the regulation of appetite are ghrelin, peptide YY (PYY), and glucagon-like peptide (GLP)-1.

The researchers recruited 17 healthy adult men for this study.  The men came into the lab on two separate mornings (after an overnight fast) and consumed a test meal.  These two separate occasions were separated by at least a week.  The test meal consisted of 300 milliliters of ice cream, which amounted to 675 calories.  The ice cream contained 59% of its calories from fat, 33% from carbohydrate, and 8% from protein.  During one lab session, the ice cream was divided into two equal portions, which were consumed 5 minutes apart (talk about an ice cream headache!).  During the other lab session, the ice cream was divided into seven equal portions, which were consumed every 5 minutes so that it took 30 minutes to consume all of the ice cream.  Subjects were instructed to finish each portion in less than 1 minute to maintain a uniform rate of meal ingestion.  The researchers took blood samples before the meal and at 30-minute intervals after the beginning of meal consumption until the end of the session 210 minutes later.  The blood samples were measured for glucose, insulin, ghrelin, PYY, and GLP-1.  The subjects completed subjective ratings of their hunger and fullness during the meal and at 30-minute intervals after the end of the meal until the end of each lab session. 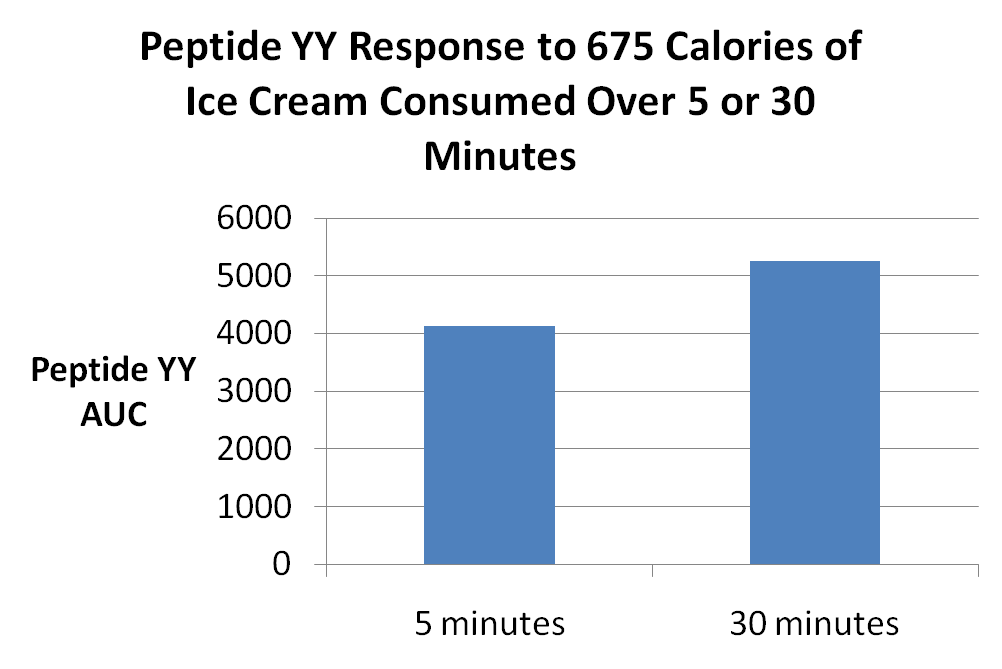 GLP-1 was also significantly higher when the ice cream was consumed more slowly:

While there were no significant differences in hunger ratings, there was a trend for feelings of fullness to be higher when the ice cream was consumed more slowly:

The results of this study indicate that eating more slowly can amplify the physiological signals that help you feel full, namely PYY and GLP-1.  Eating more slowly resulted in greater levels of these hormones, which also resulted in a trend towards feeling more full.  This lends credence to the idea that eating too quickly may result in overeating, and supports the possibility that there may be at least some cause/effect relationship between eating quickly and weight gain.  It may also be one of the reasons why processed food can contribute to overeating; processed foods are consumed more quickly than whole foods.  It may also be one of the mechanisms behind why liquid calories are less satiating than calories from solid foods; for example, it takes less than 2 minutes to consume 500 grams of apple juice but 17 minutes to consume 500 grams of whole apples.  At these rates, it would take 2 hours to consume 2000 calories worth of apples, but only 18 minutes to consume 2000 calories worth of apple juice.

Of course, in this study, the men consumed 675 calories in both conditions.  This study can only tell us that eating more slowly can help you feel more full and will amplify the physiological signals to do so.  However, the question is whether this will ultimately translate into eating less calories.  There is some experimental data that indicates that it will, which I will discuss in a future issue of Weightology Weekly.