In a past issue of Weightology Weekly, I told you how critical physical activity is for maintaining long term weight loss.  In that article, I told you how I am a fan of simple pedometers for helping to increase overall daily activity, because they can give you some feedback in regards to how much you are moving around during the day.  However, I also told you how not all pedometers are created equal, and how many can be inaccurate.

Fortunately, there are research studies that look at the accuracy of various pedometers, which can help you if you are looking to purchase one.  One study, published last year in the journal Medicine and Science in Sports and Exercise, looked at the accuracy of a couple different models of Omron pedometers.

Forty-seven healthy university students (24 males and 23 females) volunteered to participate in this study.  The subjects consisted of normal and overweight adults.  The researchers examined the accuracy of two models of Omron pedometers.  The first model, the HJ-151, features a single piezoelectric sensor that must be worn in a vertical position for accurate step counting to occur.  The other model, the HJ-720ITC, features dual piezoelectric sensors, allowing accurate step counting to occur when worn in both vertical and horizontal positions.

A subset of 34 participants (17 males and 17 females) completed three 100-meter walking trials for each pedometer model.  Participants completed trials on an outdoor track at three different walking speeds (2, 3, and 4 miles per hour).  These trials were done in a random order.  Before beginning each trial, participants were told to walk at a slow, a moderate, or a very brisk pace, with no further instruction.  Actual walking speed was measured using a timing system.  Pedometers were worn at different positions on the body according to manufacturing guidelines, including the right hip, left hip, and midback positions on the waistband.  In addition to the three waist-mounted sites, the HJ-720ITC also included positions at the right and left pockets, and in a backpack worn over the shoulders.  Pedometer step counts were recorded during each trial.  To get the actual number of steps, an investigator walked behind the participant using a hand tally counter.

A subset of 31 subjects participated in a self-paced walking condition.  These subjects completed two 1-mile walks (one walk per pedometer model) over a standardized course.  The course incorporated fat concrete walking, stair ascent/descent, up- and down-hill grass walking, and cued stops at road crossings.  The same wearing sites were used as in the prescribed pace conditions (hips, pockets, and backpack).  Participants walked at self-selected speeds, and actual step counts were measured by an investigator using a hand tally counter while walking behind the participant.

Actual average walking speeds for the subjects were 2.3, 3.3, and 4.1 miles per hour.  The following chart shows the actual and pedometer-determined step counts for the HJ-151: 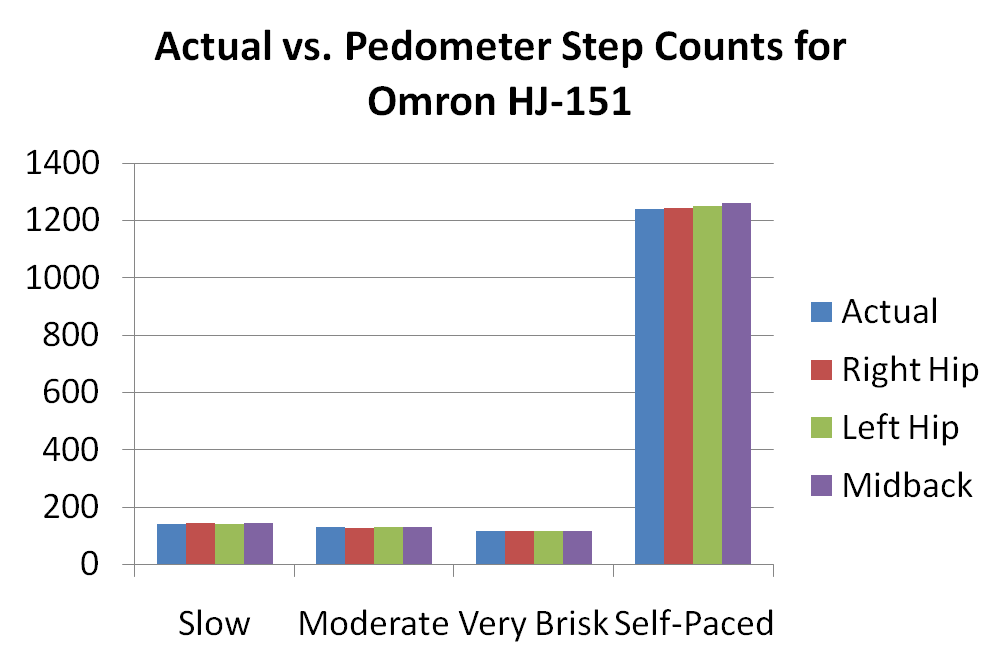 The following chart shows the actual and pedometer-determined step counts for the HJ-720ITC: 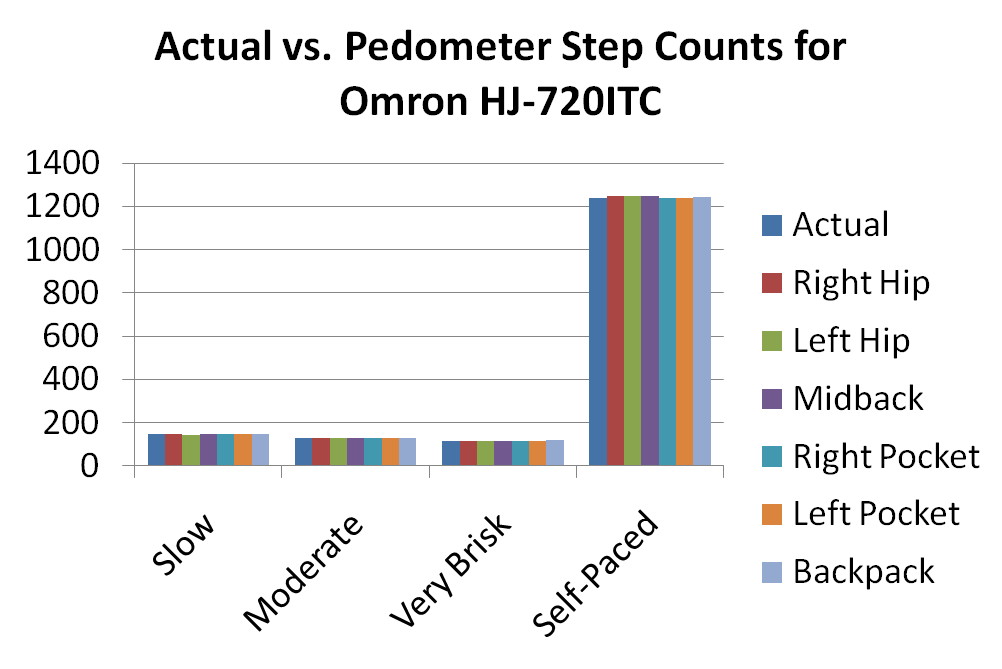 Again, the error was very low for all of the conditions, ranging from 1% to 3.5%, with an average error of 2.3%.  Only the backpack position resulted in an error of more than 3%.

This study showed that the Omron HJ-151 and HJ-720ITC are highly accurate for determining step counts at both prescribed and self-paced walking speeds, over a variety of terrain.  Nearly all of the different conditions tested had error rates of less than 3%, with many in the 1-2% range.  Accuracy was high in both normal and overweight adults.

This is not the only study to show the Omron pedometers to be accurate.  Another recent study showed the Omron HJ-112 to accurately determine step counts on a treadmill in both obese and non-obese subjects.

Keep in mind that these results are only valid when the pedometer is used according to the manufacturer’s directions.  This means that the Omron HJ-151 is only valid when worn on the hip or mid-back, and the 720-ITC is only valid when worn on the hips, mid-back, in the pockets, or in a backpack (with the backpack being the least accurate).  These results are also only valid at the walking speeds tested (2-4 miles per hour).  The pedometers may not be as reliable at extremely slow walking speeds.  In fact, recent research shows the Omron HJ-720ITC to lose its accuracy at extremely slow walking speeds, such as in chronic heart failure patients.

This study also says nothing about the accuracy of other brands of pedometers.  The accuracy of various pedometers from different manufacturers can vary tremendously; thus, do your homework if you are interested in finding an accurate pedometer.  The mechanism the pedometer uses for step counting can make a difference in accuracy, particularly at slow speeds; piezoelectric sensors are more accurate at slow speeds than spring loaded sensors.

This study also only tells us the accuracy of certain Omron models.  The Omron HJ-150 and HJ-151 use the exact same single axis piezoelectric sensor, and thus will have the same accuracy.  The Omron HJ-112, HJ-113, and HJ-720ITC use the same dual-axis piezoelectric sensors, and will have the same accuracy.  The HJ-112 is the pedometer I personally use, and my wife has also been using this pedometer.  This is the same pedometer that we gave to our clients in the obesity treatment program for which I used to work.

The Omron HJ-112 pedometer, as well as the HJ-113 and HJ-720ITC, are highly accurate for step counting

There is the Omron HJ-203 series, but I do not know of any research determining their accuracy.

One difference between this study’s results and my own experience with the Omron HJ-112 is in the erroneous detection of non-walking behavior.  In this study, the researchers tested to see if 2 minutes of heel tapping, 2 minutes of leg swinging, and a 4-mile drive test would erroneously register steps on the pedometer.  They found that it did not.  However, I am one of those fidgeters who does rapid heel tapping, and I know from personal experience that the HJ-112 registers my rapid heel taps as steps when I wear it in the same pocket as the leg which is doing the rapid tapping.  Thus, I have found that I need to remove the pedometer from my pocket when sitting at a desk; otherwise I may end up with more steps than I really have.  This is not an issue, though, if I wear the pedometer on my hip.

One of the limitations of using a pedometer to assess physical activity is that it will not capture non-walking activity.  However, research does indicate that pedometer step counts correlate reasonably well with other measures of physical activity.  Also, given that walking at only 2 miles per hour will increase your energy expenditure by over 150% compared to sitting, a simple pedometer is a great, inexpensive way to help you increase your NEAT and overall daily energy expenditure.  It gives you immediate feedback regarding your walking behavior through out the day, and can help encourage you to increase your walking behavior over that time span.

REFERENCE:  Holbrook, E.A., et al.  Validity and reliability of Omron pedometers for prescribed and self-paced walking.  Medicine and Science in Sports and Exercise.  41(3):670-674, 2009.