This article represents part 3 of a series on how insulin has been unfairly demonized by many in the nutrition field.  If you have yet to read the first few parts, you can read Part 1 here, and you can read Part 2 here.  In this article, I will discuss how dairy products are among the most insulinemic foods out there, yet do not promote fat or weight gain, which pokes holes in the hypothesis that carbohydrates drive fat accumulation through insulin secretion.

One of the premises of individuals like Gary Taubes is that carbohydrates stimulate fat accumulation by stimulating insulin secretion.  I’ve already shown how this premise is flawed in the last two parts of my series.  Namely, I showed how protein also stimulates insulin secretion (sometimes as much as carbohydrate) yet does not promote weight or fat gain.  I also showed how the drug exenatide restores rapid-phase insulin secretion in diabetics yet promotes weight loss.

If the carbohydrate/insulin hypothesis were true, then we would predict that foods that are extremely insulinemic would be uniquely fat promoting.  What many people do not realize is that dairy foods are among the most insulinemic foods out there.  In fact, they create much greater insulinemic responses than you would expect based on their carbohydrate content.  Not only that, but lactose, the primary carbohydrate in dairy foods, is actually low glycemic and produces slow rises in blood sugar (lactose has a glycemic index of 46 compared to white bread which is 100).  In fact, the glycemic index of many dairy products is quite low, with full-fat milk at 39, skim milk at 37, ice cream at 51, and fruit yogurt at 41.

Despite the low blood sugar responses, dairy products create very large insulin responses.  For example, in one study, dairy products created similar or greater insulin responses than white bread, despite the fact that the blood sugar response for some of the dairy products was 60% lower than the white bread.  In this study, the researchers compared the glycemic and insulinemic responses between white bread, a low gluten/lactose mixture, a high gluten/lactose mixture, cod with added lactose, milk, whey protein with added lactose, and cheese with added lactose.  All of the conditions contained 25 grams of carbohydrate and 18.2 grams of protein, except for the white bread and low gluten/lactose mixtures, which contained 25 grams of carbohydrate and 2.8 grams of protein.  Thus, lactose was the carbohydrate in all of the conditions except for white bread.

When you look at the insulin area-under-the-curve (AUC) for the various conditions, you can see that the dairy products actually created greater insulin responses than the white bread, despite having similar amounts of carbohydrate: 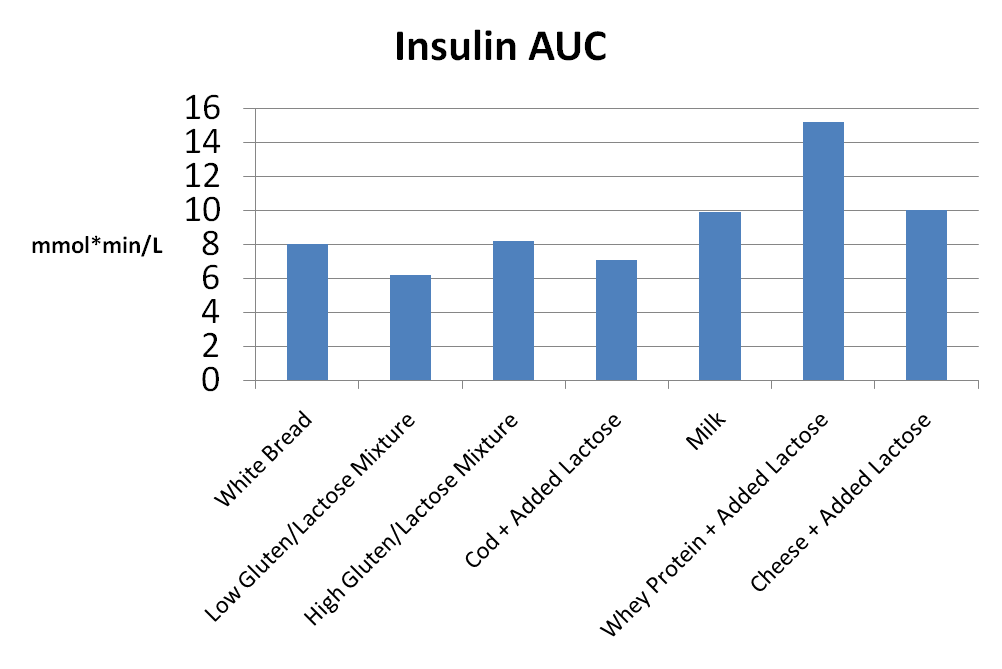 It is obvious that it is not the lactose that is responsible for the greater insulin response, because the gluten/lactose and cod/lactose mixtures resulted in similar or lower insulin responses to white bread. 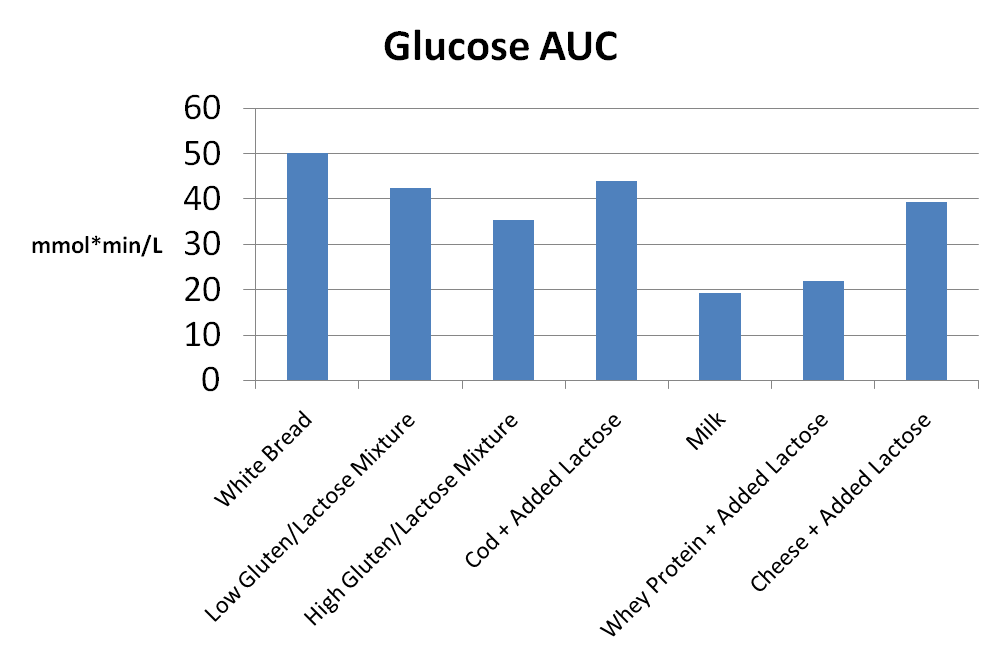 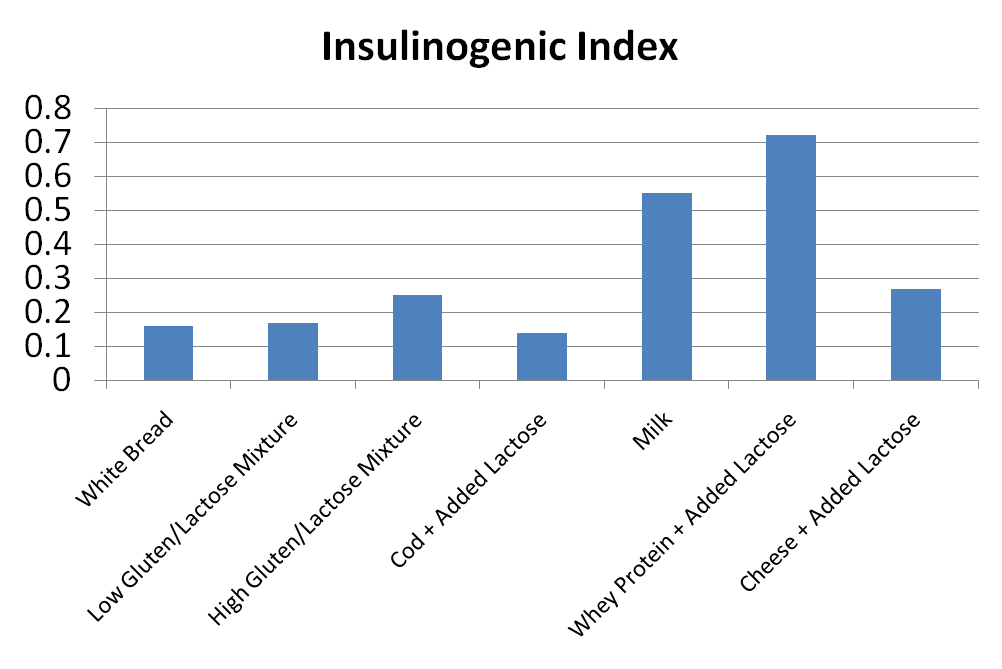 Here’s the results of another study showing the glycemic and insulinemic indexes of milk compared to white bread: 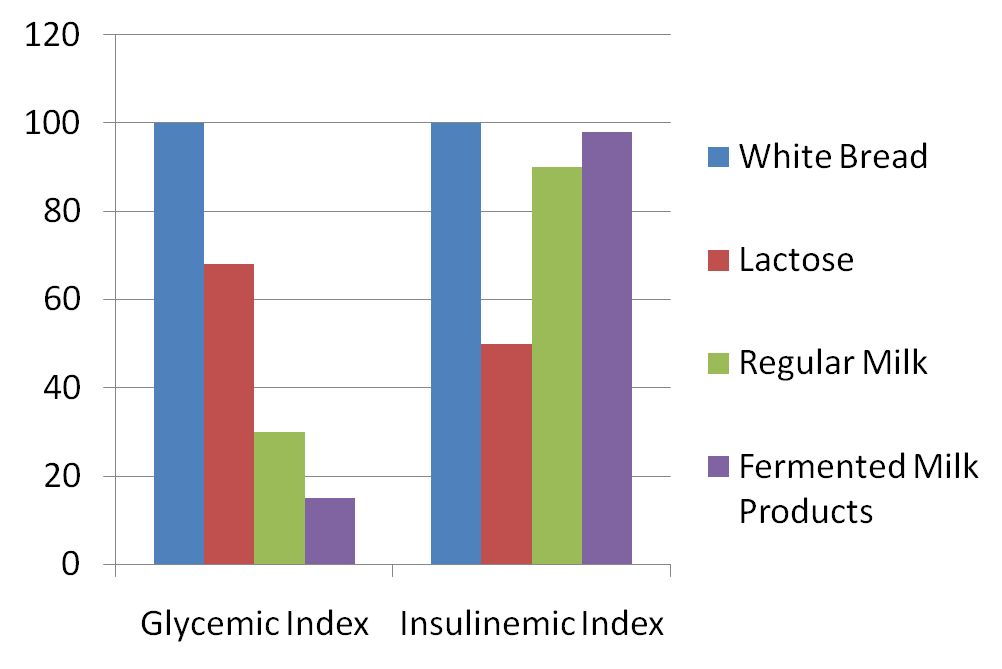 Why Does Dairy Stimulate So Much Damn Insulin?

Another reason that dairy products stimulate so much insulin secretion is their effects on a hormone called glucose-dependent insulinotropic polypeptide (GIP).  Like GLP-1 which I wrote about in part 2 of this series, GIP is an incretin.  This means that it is a hormone produced by your intestines that stimulates insulin secretion.  Dairy products stimulate increased production of GIP.  In the study I discussed earlier which compared whey, milk, and cheese to white bread, whey and cheese resulted in 21-67% greater GIP responses than white bread: 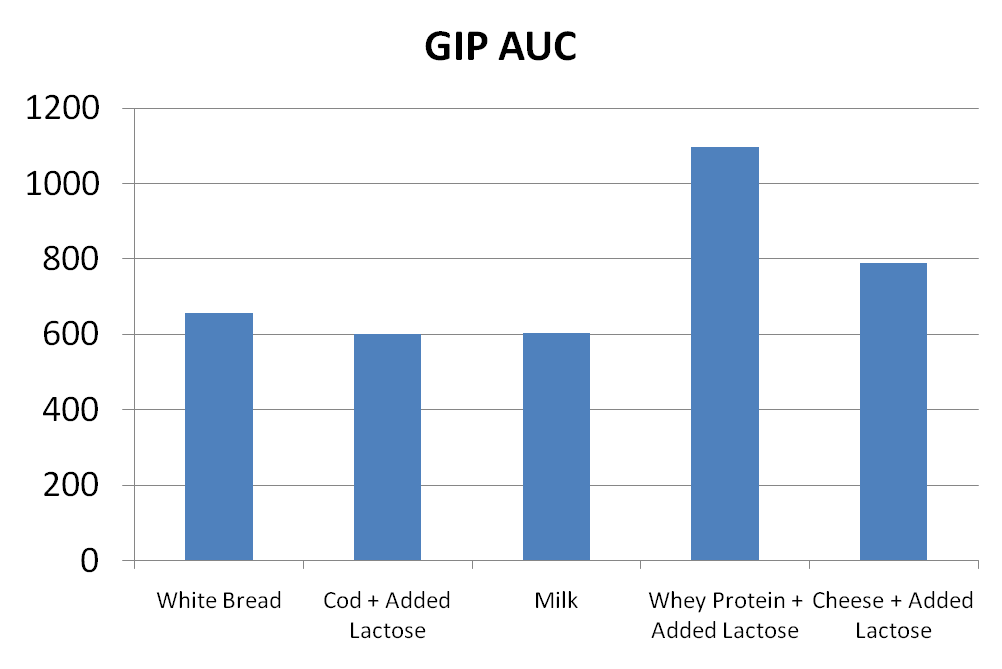 While these are observational studies, the results from controlled studies on animals and humans are similar.  In fact, animal studies show less weight gain when they are fed dairy products.  In mice, yogurt supplementation results in less weight and fat gain than controls on isocaloric diets.  In another study, transgenic mice lost weight on energy restricted diets.  The mice were then allowed to eat ad libitum (i.e., as much as they felt like).  The mice fed dairy products regained less fat and weight during refeeding.  In a third study, the intake of dairy products, but not a calcium supplement, decreased weight gain and body fat in mice fed a high-fat diet.  In a fourth study, dairy protein attenuated fat gain in rodents fed a high-fat, high-sugar diet.  In a fifth study, a dairy diet attenuated weekly weight gain in Sprague-Dawley rats.

Why Am I Not Fat?

My own personal experience with dairy fits right in with the science.  I consume a lot of dairy and have for many years.  I go through 2-3 gallons of milk per week.  I also go through a lot of Greek yogurt, cottage cheese, regular cheese, and whey protein.  I have some type of dairy with just about every meal.   Thus, I have large amounts of insulin flowing through my body pretty much all day.  If insulin was truly the fat-promoting, weight-gaining hormone that some have made it out to be, then I should be obese by now.  Yet, I am not…not even close.

Not only that, but the people who think insulin makes you hungry, that would imply that I should be starving all of the time with all of the insulin that is flowing through my body all day.  Yet, I’m not.

Got Milk?  Got Insulin!

The evidence is overwhelming that dairy products do not promote weight gain, and they actually inhibit weight gain in animal studies.  This is despite the fact that dairy products produce very large insulin responses, as much or greater than many high carbohydrate foods.  Thus, it is clear from this article, as well as my previous articles, that the carbohydrate/insulin hypothesis is incorrect.  Insulin is not the criminal in the obesity epidemic; instead, it is an innocent bystander that has been wrongly accused through guilt by association.

Click here to read part 4 of my series, where I address the misconception of how insulin regulates blood sugar.