However, low-carbohydrate diets are also usually high in protein.  It is well established that increasing dietary protein can increase the number of calories you burn for a given calorie intake.  Thus, we know that increasing dietary protein can provide a metabolic advantage.  But what about lowering carbohydrate, independent of protein intake?  I attempted to answer this question with a meta-analysis that I published back in 2006 (although the research was actually performed in 2004).  I concluded that a very low carbohydrate intake (low enough to cause ketosis) provided a metabolic advantage, independent of protein intake.  However, I now consider my study unreliable for answering this question, for reasons that I will address later in this article.

The best way to answer this question is through a carefully controlled study, where you manipulate protein and carbohydrate intake independently, and measure the number of calories burned under various combinations.  When I did my meta-analysis, no such study existed.  Fortunately, we now have a study where this has been done.

The subjects ate these diets while staying in a respiration chamber for 36 hours.  The respiration chamber allowed for the continuous measurement of the number of calories burned.  To mimic the glycogen (a chain of carbohydrate stored in your muscles) depletion that exists on low-carbohydrate diets, group 2 did an exhaustive exercise test before each diet to burn up the glycogen stored in muscle tissue.  The researchers also determined the subjects’ self-rated feelings of hunger and fullness.

“The Metabolic Advantage”…and The Winner Is…

The results of this study can be seen in this chart: 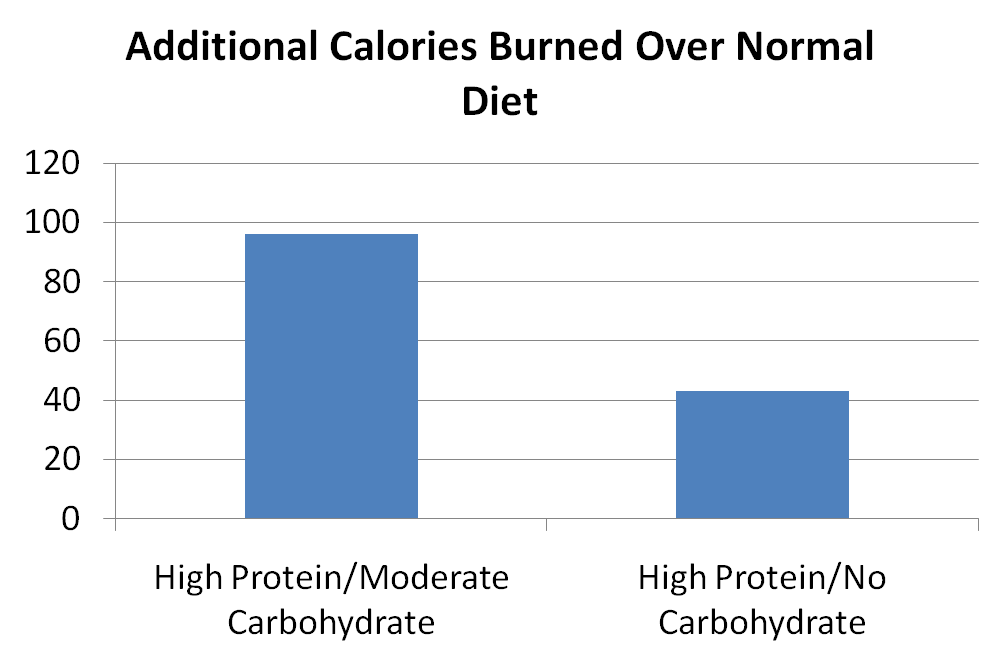 The results for hunger and fullness can be seen in this chart:

There was a significant decrease in hunger, and a significant increase in fullness when the subjects were on the high protein, moderate carbohydrate diet as compared to the normal diet.  This has been shown in many other studies.  This study further confirms that protein can help reduce your appetite.  In fact, in one study, a high protein, moderate carbohydrate diet caused a spontaneous reduction in food intake of 1,280 calories per day.

Thus, the primary reason why low-carbohydrate diets tend to show superior weight loss in the short-term has nothing to do with a metabolic advantage, or an effect on insulin, or some other magical unknown effect.  It all has to do with appetite control.  When people consume a low-carbohydrate, high-protein diet, they are getting a “double-whammy” in regards to appetite regulation.  They’re getting the dramatic benefit of increasing protein, and an additional (although smaller) benefit of a ketogenic diet.  The bottom line is that the people on these diets spontaneously eat less….A LOT less.

The Need for an Individualized Approach

One thing about studies in this area is that individual responses tend to vary dramatically.  For example, in one study I mentioned earlier, the responses between the low carbohydrate and moderate carbohydrate diets were highly variable, and there was considerable overlap.  Thus, while ketosis decreased appetite on average, it didn’t help in every individual.  This is not surprising, as the control of appetite is a highly complicated, and is influenced by both your physiology, genetics, and psychology.  Thus, an effective dietary approach for one individual may not be effective for another; for example, one person may have outstanding results on a low-carbohydrate diet, while another person may do better with a more moderate approach, due to a variety of reasons.  This is why there is no “one-size-fits-all” dietary approach for everyone.  This is also evident when you peruse various internet message boards regarding various dietary philosophies.  You will find success stories and struggles with every approach.  Finally, it is evident when you look at the long-term clinical trials of various dietary approaches (including low-carbohydrate approaches), as the amount of weight regained and the failure rates tend to be high with all approaches.  Thus, there are no simple solutions to the problem of weight gain and obesity, as there are hundreds of variables all simultaneously interacting to produce the problem in the first place.

A Note About Scientific Integrity

I mentioned earlier about how I now consider my 2006 meta-analysis conclusions to be unreliable.  The paper was a good paper for my knowledge level and the available data at the time.  However, science is always changing, as newer and more reliable data is collected, and as the knowledge base grows.  Any scientist with integrity should be willing to change his mind about an idea, if new information indicates that the old information may have been wrong.  I have learned much since the publication of that paper, and my new knowledge now tells me that the paper’s conclusions were likely wrong.  Among the reasons why I now consider that paper unreliable:

These flaws in my analysis, coupled with the new data from the well-controlled studies I discussed in this article, indicate that my conclusions were wrong.

REFERENCE:  Veldhorst, M.A., et al.  Presence or absence of carbohydrates and the proportion of fat in a high-protein diet affect appetite suppression but not energy expenditure in normal-weight human subjects fed in energy balance.  Br. J. Nutr.  (Epub Ahead of Print)