In last week’s issue of Weightology Weekly, you learned that eating slowly increases PYY and GLP-1, two hormones that are important for satiety.  You also learned that the increase in these hormones was associated with a tendency to feel more full.

However, this study can only tell us that eating more slowly can help you feel more full.  But does this lead to an actual reduction in food intake?  In animal studies, when you reduce their eating rate by increasing time between food items, the animals reduce their meal size.  The question is whether the same thing happens in humans.  A study published in the Journal of the American Dietetics Association tells us that it does.

Slowly Chewing on the Methods

Thirty healthy females were recruited for this study.  Their average BMI was 22.1, although they ranged from 16 to 31.5.  However, only three had a BMI between 25 and 30.  The participants came into the lab and completed personal health history questionnaires; typical eating rate was self-reported as “slow”, “medium”, or “fast.”  Of the subjects, 4 reported to be slow eaters, 14 reported to be medium-speed eaters, and 12 reported to be fast eaters.

The next two lab visits were performed in a random order; these lab visits were performed 3 to 7 days apart.  One visit was a slow eating condition, and the other was a quick eating condition.  These second and third visits were conducted during the mid-follicular phase of each subject’s menstrual cycle, to control for possible menstrual cycle effects on appetite.  Each test visit was conducted with one individual subject at a time.  On the day prior to each test visit, subjects were instructed to avoid strenuous physical activity, to refrain from alcohol and caffeine consumption, and to keep diet as close to normal as possible and similar on both days.

On the morning of the test days, subjects’ breakfasts were specifically prescribed and matched between the slow and quick eating conditions.  The breakfast contained around 400 calories, and consisted of 8 ounces of orange juice, 8 ounces of 1% or 2% milk, and 1 cup of ready-to-eat cereal, except granola or Grape Nuts.  Decaffeinated tea or coffee was considered optional.  At lunch time, subjects reported to the lab following a minimum 4-hour fast.  Subjects were offered generous preweighed portions (600 grams) of a lunch, and water.  The lunch contained 870 calories and consisted of ditalini pasta with diced tomatoes with Italian seasoning, celery, and minced garlic sautéed in olive oil, and Parmesan and Romano cheeses.  Ditalini pasta was specially chosen because its small size allowed for slow or quick eating rates with small or large utensils.  The meal consisted of 48% of calories from carbohydrate, 39% from fat, and 13% from protein.

During each meal, the subjects were instructed to consume as much as they would like to the point of comfortable satiation.  Under the quick condition, subjects used a large spoon (a soup spoon) and were told to consume the meal as fast as possible with no pauses between bites.  However, they were instructed to not eat so fast that it was uncomfortable for them.  During the slow condition, they were instructed to take small bites, put down the spoon between each bite, and chew each bite 20 to 30 times.  A small spoon (teaspoon) was provided with these meals.  The researchers measured how much food was consumed in each condition, along with ratings of hunger, satiety, desire to eat, thirst, and palatability. 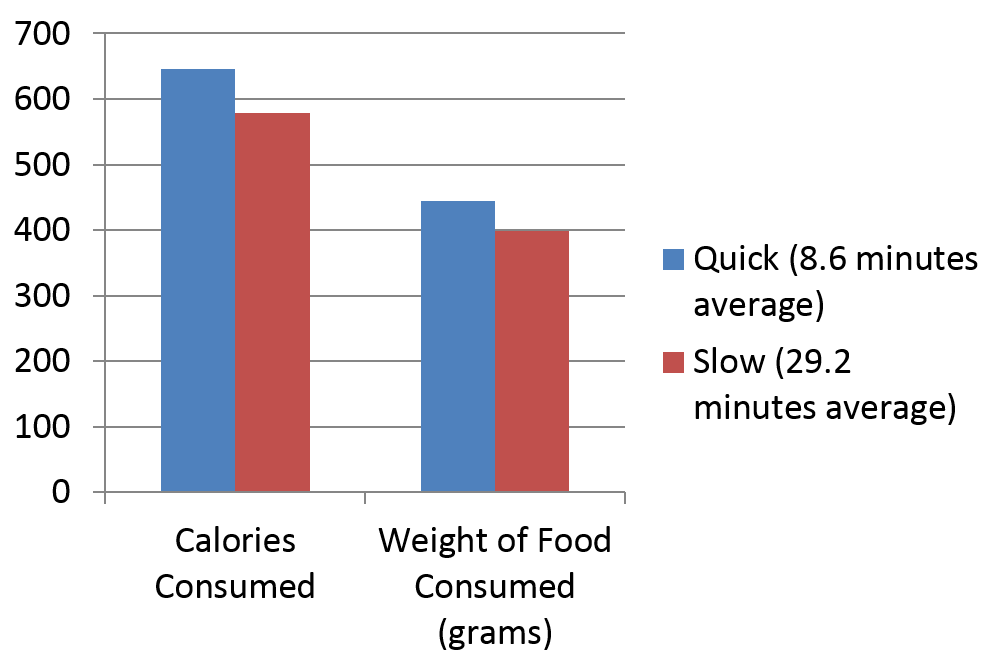 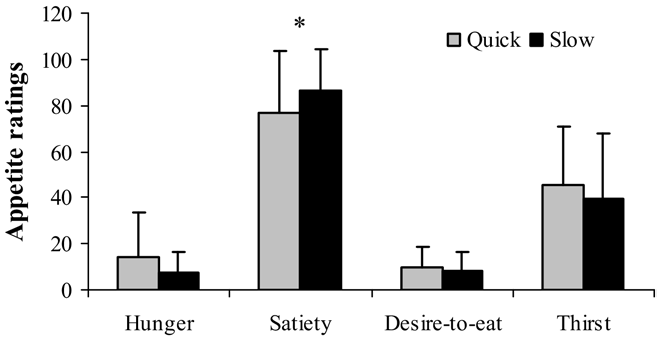 The authors calculated a Satiating Efficiency Index, which divides the satiety ratings by the energy intake.  It was significantly higher in the slow eating condition: 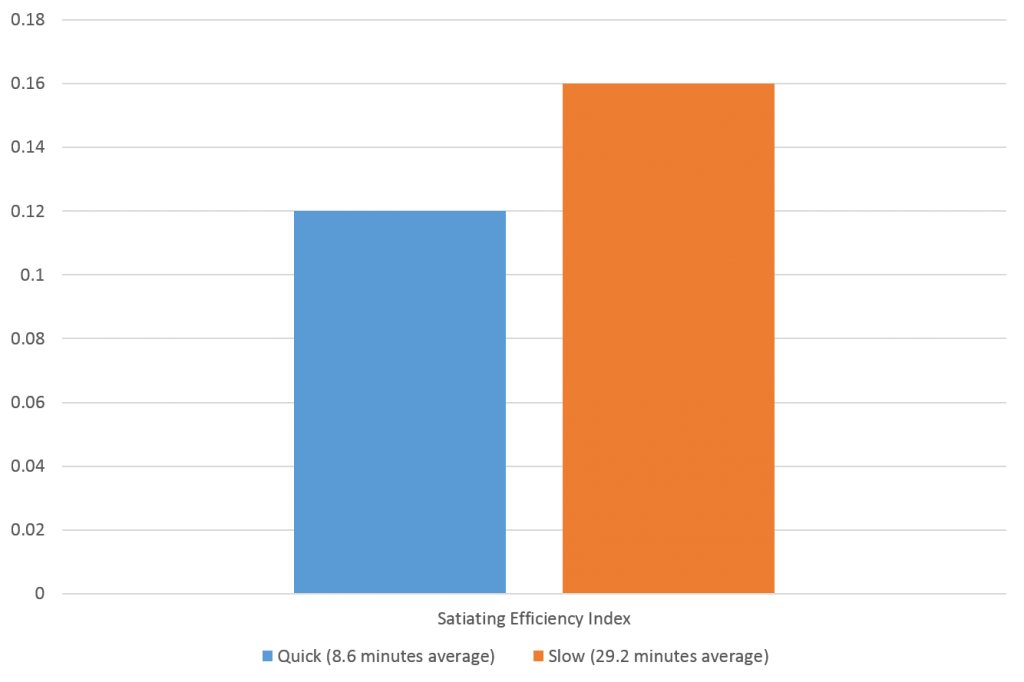 There were no significant differences between conditions in palatability ratings.  However, when you look at satiety and hunger ratings over time, it is interesting to note that hunger ratings were actually higher, and satiety ratings lower, during the initial part of the meal in the slow condition: 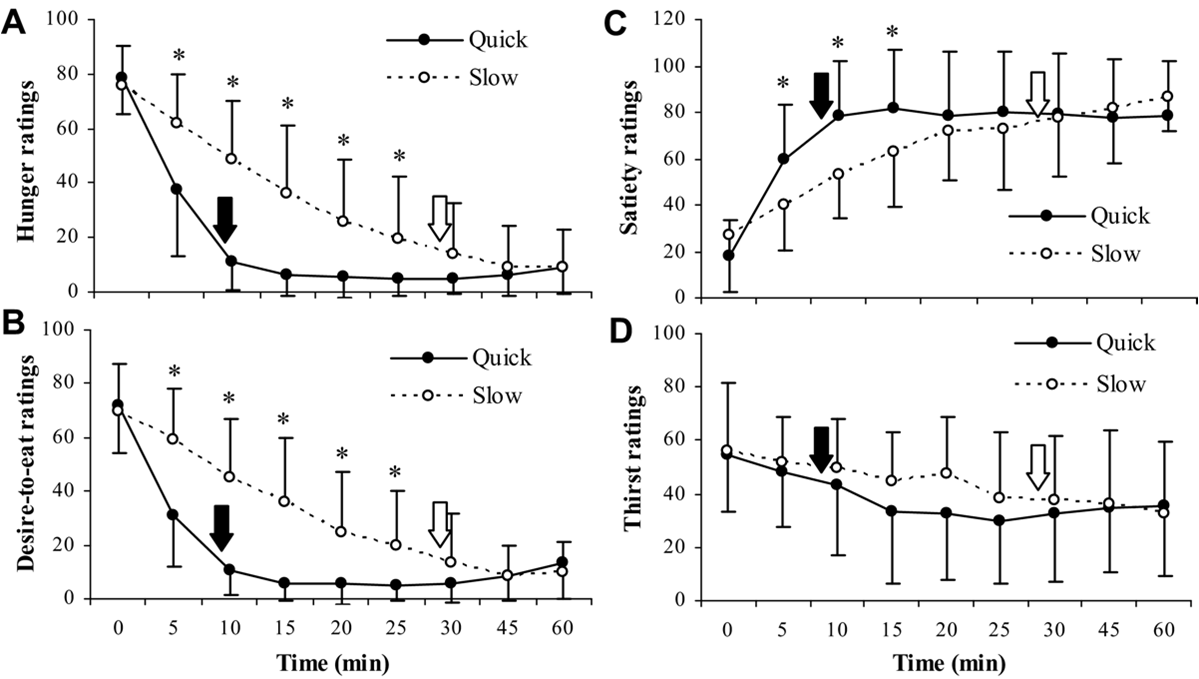 In the above charts, the black arrow represents meal termination for the fast condition, and the white arrow represents meal termination for the slow condition.  Thus, the subjects felt more hungry and less satiated during the meal when they ate slowly; however, once the meal was done, the subjects felt less hungry when they ate slowly, and they ate less overall.

The results of this study suggests that eating more slowly will help you eat less.  One of the reasons is likely due to the enhancement of PYY and GLP-1 production as I discussed last week.  However, no study is perfect, and there are a number of limitations of this study to consider.  First, the fact that the subjects used different spoon sizes in each condition could be a confounding factor; it is known that portion size can affect energy intake, and it is possible that even something like spoon size could do the same.  Thus, the higher intake in the quick condition could be related to spoon size and not necessarily the speed of intake.  Another limitation is that most of the subjects were of normal weight; results for obese subjects could be different.  Third, results may be different for meals of other macronutrient compositions.  The meal composition in this study was similar to the typical Western diet (low to moderate in protein, moderate to high in fat, and moderate to high in carbohydrate); results could be different for high protein meals.  Fourth, the subjects in the slow condition also drank more water, which could be a confounding factor.  However, it could also be argued that this better represents the natural situation in how most people eat, and some research indicates that water intake during a meal does not affect energy intake.  Fifth, this study involved women; results could be different for men, who are known to eat at faster rates than women.  Sixth, most of the subjects in this study were habitual fast and medium speed eaters; results could be different for people who already eat slowly.  Finally, while this study demonstrated that eating more slowly can reduce intake at a single meal, it remains to be demonstrated whether eating more slowly on a consistent basis can reduce food intake over days, weeks, and months.

There are a couple older studies that conflict with this study.  One study found smaller bite sizes did not affect energy intake, and another study found that pauses within a meal resulted in decreased ratings of satiation and greater food intake.  However, the present study provides an advantage over those two older studies in that it represents a more natural situation for the subjects.  In one of the older studies, subjects were given foods of certain bite sizes, which is not typically how people vary the speed of their food intake.  In the other study, artificial pauses were introduced after every 50 grams of food was ingested.  The current study involved a combination of chewing slowly, taking smaller bites, and pausing between bites, which reflects more naturally how people will slow down their eating.  It could also be that, while these factors in isolation may not result in less food intake, combining all three of them will reduce food intake.

It should also be noted that, while eating more slowly led to decreased food intake in most of the subjects, there were a few subjects who ate more during the slow condition.  Thus, there is likely individual variation in how eating speed can affect how much someone eats.  Thus, while the data suggests that eating more slowly (through a combination of chewing thoroughly, taking smaller bites, and pausing between bites) can help most people reduce their food intake, individual results can vary.