It is a well established scientific fact that people, on average, do not accurately report or record their food intake.  In fact, most people tend to underreport the amount of calories they eat.  The degree of underreporting can systematically vary based on a number of factors, including, but not limited to, weight, income, education, gender, and various psychological characteristics.  The degree of underreporting can be quite severe.   One study comparing obese twins to their non-obese twin counterparts indicated underreporting of 764 calories per day.  Another study found certain individuals to be underreporting their food intake by over 2000 calories per day.  Underreporting is also quite entrenched.  In fact, paying people doesn’t help them report their intake more accurately, and people will still underreport even when they know their calorie intake can be verified.

There are three ways that people can underreport.  One way is that they can simply fail to report all of the food they eat, misreport the portion sizes, or incorrectly describe the foods.  The second way is through under-recording; the task of recording food intake can be quite tedious and people may simply not be diligent enough in weighing and recording all foods.  Also, people may tend to undereat during short periods of time where they know they are being measured.  A third way is that food labels themselves can have inaccuracies in regards to their reported calorie contents; in fact, some restaurant foods and some commercially available processed foods can average 8-18% more calories than what is indicated on the label or menu, and certain individual items can have over 200% more calories!

How Can We Test the Accuracy of People’s Reported Calorie Intake?

Before the 1980’s, scientists did not have an accurate way for measuring the amount of calories someone burns when in a free-living environment.  Sure, you could confine someone to a room that measured the total number of calories burned (known as room calorimetry), but this is not relevant to a free-living situation (where the number of calories burned is significantly higher).  Then, in 1982, came the publication of a paper that would forever change the world of nutrition and physiological science.  This technique was known as doubly labeled water.  With this technique, people drink water that has two stable isotopes.  The elimination of these two isotopes from the body over time (usually a 1-2 week period) is used to determine carbon dioxide production.  This carbon dioxide production can then be used to calculate the number of calories you burn.  The doubly labeled water technique was actually invented in the 1950’s, but its use was limited to small animals.  It wasn’t until the 1980’s that technology had advanced enough, and that isotope costs had decreased enough, where it could be performed in humans.  The method can accurately measure your 24-hour energy expenditure within ±5%.

The doubly labeled water method allows us to determine whether someone is accurately reporting calorie intake.  We know that the average person will misreport.  But what about someone whose profession revolves around counseling people on their food intake?  Researchers from the Pennington Biomedical Research Center compared the accuracy of dietitians’ self-reported food intake to the accuracy of non-dietitians.

The researchers recruited 10 female registered dietitians and 10 women of comparable age and weight who were not dietitians.  All of the subjects were trained to provide a 7-day weighed food intake record.  Doubly labeled water was used to measure energy expenditure over that same 7 days.  Participants were told that the goal was to record food intake as accurately as possible. 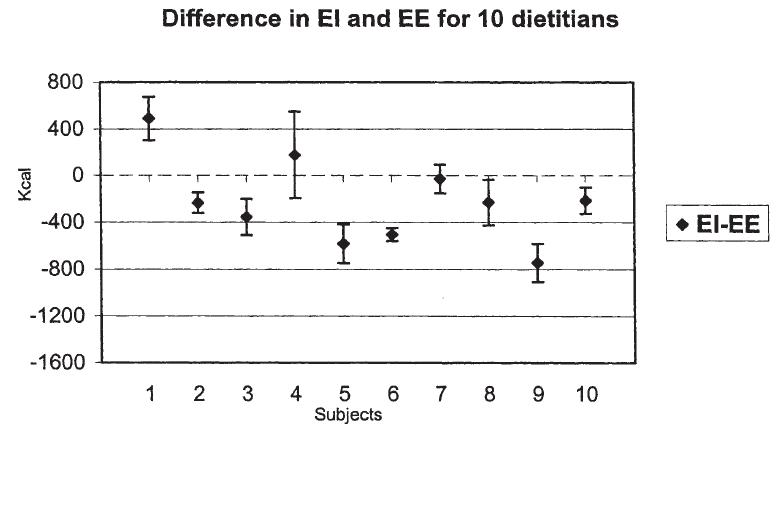 Here are the individual results for the non-dietitians: 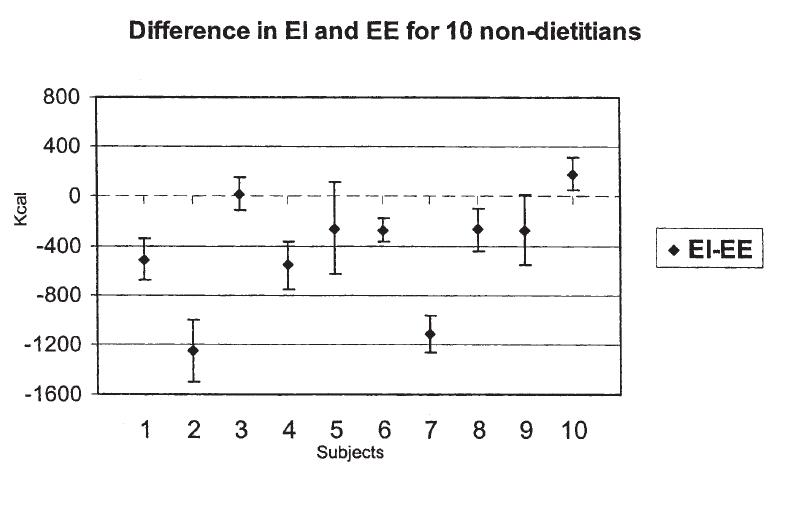 You can see the underreporting was definitely more severe among the non-dietitians, with a few individuals underreporting by over 1000 calories per day.

I’ve often heard people swear that they don’t eat a lot of calories but struggle to lose weight.  However, the fact is that most people are very inaccurate in assessing how much they are really eating.  This study shows that even dietitians can be inaccurate in their food intake estimates.  If dietitians can often be inaccurate, then the average person will certainly be that much more inaccurate.

This study also illustrates why diets high in protein (whether low carb or moderate carb) are so effective for weight loss.  It is well established that people spontaneously eat less when given high protein intakes; in fact, the spontaneous reduction in calorie intake can range from 440 calories to more than 1,000 calories.  People end up eating less without counting their calories.  There are no magical effects of lowering insulin or having a perfect “Zone” of macronutrients.  It’s simply a matter of satiety.