One of the most frequent errors that people make in their thinking is in regards to causality.  Too often, we assume that, because two events coincide with each other, then one event caused the other.  This is quite frequent when the media reports on scientific research.  A study might report an association between A and B, and the media will report that A causes B.  Non Causa Pro Causa, which in Latin means “non-cause for cause”, is a general catch-all term for making incorrect conclusions regarding causality.  Such a fallacy is also often called “False Cause.”

This latin term literally means “With This, Therefore Because of This.”  This refers to the assumption that, since two events happen at the same time, then one must cause the other.  For example, ice cream intake goes up in the summer.  Drowning incidence also goes up in the summer.  If you were to conclude that eating ice cream makes people drown, then you would be committing this fallacy.

This common error is made when people interpret epidemiological research (which can only demonstrate associations).  The fact is that correlation does not imply causation.  One example of this error in the nutrition field was when Ancel Keys published his research on dietary fat and heart disease.  In his Seven Countries study, Keys found a strong correlation between saturated fat intake and heart disease.  This research was used to imply that saturated fat causes heart disease, and was partly responsible for the low-fat craze of the 1980’s.  Ignoring the fact that Keys only selected countries that fit his hypothesis (an example of confirmation bias), this is an example of the cum hoc, ergo propter hoc fallacy.  Simply because the two correlated with each other, does not mean one caused the other.

This latin term means “After This, Therefore Because of This.”  In this fallacy, if event B happens after event A, then we assume that event A must have caused event B.  Here are a couple examples:

The post hoc, ergo propter hoc fallacy is often the basis for superstitions and erroneous beliefs.  For example, a sick person who is treated by a faith healer becomes better afterward.  We commit this fallacy if we assume that the faith healer caused the sick person to become better. 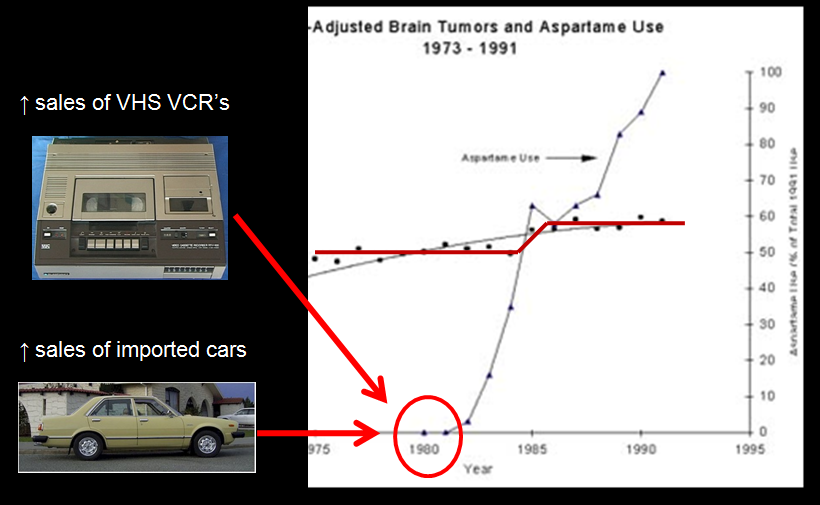 Remember that just because two events coincide with each other, or just because one event happens after another, does not mean that one event causes the other.  While the existence of an association can suggest the possibility of a causal relationship, there are many associations that are completely spurious, or that are related to other factors.  In my ice cream and drowning example, there is a third factor that is responsible for the observed association between ice cream intake and drowning incidence….it is hot outside.  When it is hot outside, more people eat ice cream.  Also, when it is hot outside, more people go swimming, and thus drowning incidence is increased.