When you exercise, you don’t just burn calories during a session, but you also burn calories after your’ finished.  Some people call this a caloric “afterburn”.  Here at Weightology, you have learned that the “afterburn” caused by moderate exercise is quite small, amounting to only an extra 30 calories per day or so.  The “afterburn” caused by intense interval training isn’t much better, perhaps giving you about 30 more calories of energy expenditure during recovery compared to moderate exercise.  The only type of exercise that does give you a sizable increase in energy expenditure during recovery is resistance training.  In fact, a high volume resistance training session can increase your metabolism by up to 8-9% for 3 days after the session is complete.   Of course, this is for a high volume session.  There are many people, either because they may lack time or are proponents of High Intensity Training (HIT), who engage in low volume weight training, often only doing 1-3 sets per exercise.  The question then becomes whether low volume resistance training can give you an “afterburn.”  Fortunately scientists were asking the same question, and published their results in the European Journal of Applied Physiology.

As you would expect, subjects burned significantly more calories during the 3-set protocol compared to the 1-set protocol: 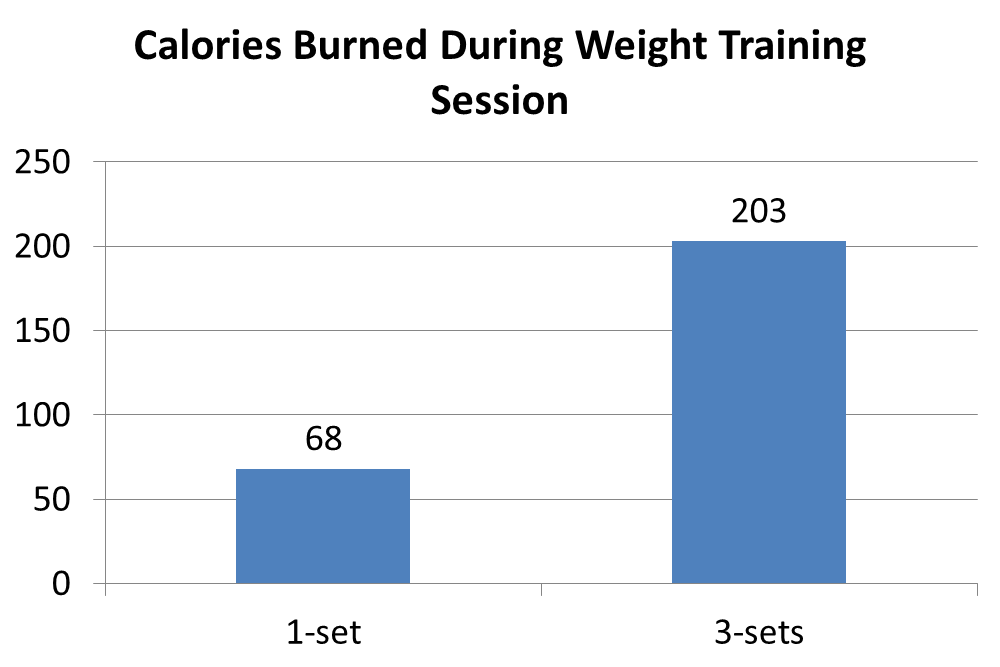 REE was elevated for 72 hours in both groups by a similar amount: 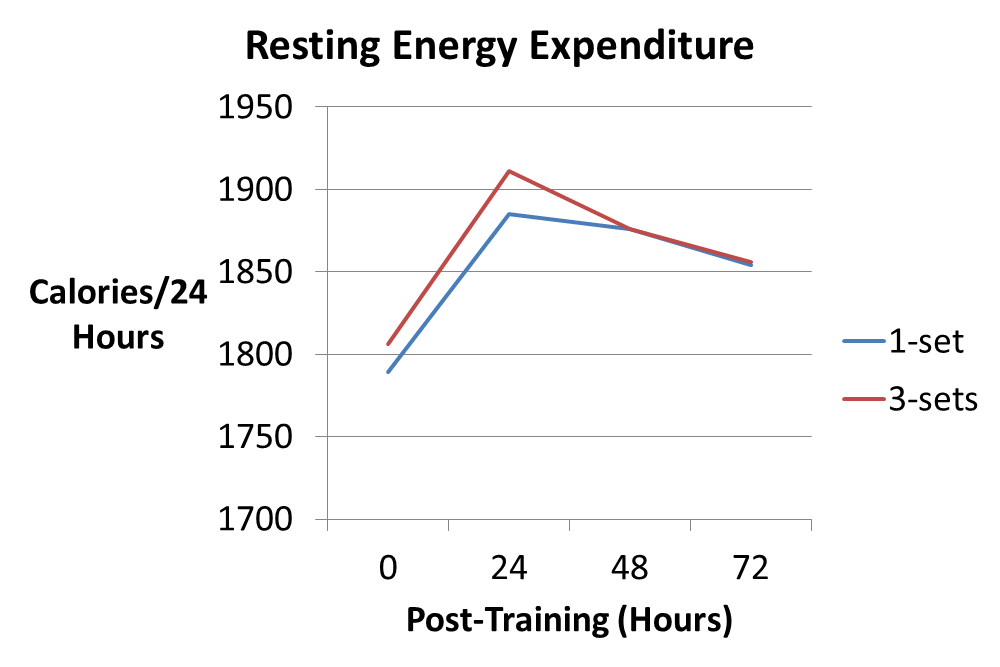 Similar Afterburn, But Don’t Forget The Session Itself!

This study showed that a weight training session consisting of 1 set per exercise for 10 exercises caused a similar increase in post-exercise energy expenditure when compared to 3 sets per exercise.  Thus, you are likely going to get around a 5% increase in your metabolism for 3 days when training with a volume of 1-3 sets per exercise.   This is going to be around 80 calories per day in someone who weighs around 200 pounds.  While this is not an enormous amount, it is still equivalent to a 15 minute brisk walk in a 200 pound person.  It is likely going to take higher resistance training volumes, and/or an emphasis on the eccentric or negative portion of a lift, to get a larger increase.

As with any study, there are limitations to consider.  The sample size in this study was extremely small (only 8 subjects); it can be difficult to detect differences between groups with such a small sample.  There could be differences between a 1-set and 3-set protocol that would become apparent with a larger sample size.  The study was performed on young, college-aged men, which is a very specific population in terms of their characteristics. Results could be different for different age groups or for women.  Finally, the men had no weight training experience; results could be different for people with weight training experience.

Overall, you’re going to get a similar “afterburn” when doing 1 set per exercise compared to 3 sets per exercise.  However, you’re going to burn more calories overall with a 3-set session when you include the calories burned during the session.  You’re also going to build more muscle with a 3-set session.  If time is not an issue, you should go with multiple sets per exercise to maximize both your fat loss and muscle gain.  However, if you have a busy lifestyle and are limited on time, you can still get significant benefits with one set per exercise.