A drum that I have been constantly beating here in the pages of Weightology Weekly is the importance of non-exercise activity thermogenesis, or NEAT, for weight loss and weight maintenance.  NEAT refers to all of your cumulative physical activity over an entire day, not including your structured exercise program (if you have one).  From fidgeting to walking to your car to typing on a computer, NEAT makes up the majority of the calories you burn through physical activity.  Because it makes up most of your activity energy expenditure, it is also the place where you can make the greatest impact on the number of calories you burn each day.  NEAT is one of the most critical, yet often one of the most ignored, components of a successful weight management program.  I’ve already told you about how NEAT decreases with weight loss, and how this change is greater than you would expect based on the weight loss alone.  I’ve also told you how the degree to which NEAT decreases can predict how much weight you will regain after weight loss.  I’ve written about the importance of devices like pedometers to help you maintain or increase your NEAT.

The subjects in this analysis were drawn from 184,910 participants in the CPS-II Nutrition Cohort, a study of cancer incidence and mortality begun by the American Cancer Society in 1992.  This cohort is a subgroup of approximately 1.2 million participants in the original CPS-II cohort, a mortality study started by the American Cancer Society in 1982.  Members of the Nutrition Cohort who were 50-74 years of age in 1992 were invited to participate by completing a mailed questionnaire.  The 10-page mailed questionnaire included questions on demographic, reproductive, medical, behavioral, and lifestyle factors.  For this analysis, the researchers excluded subjects with a personal history of cancer, heart attack, stroke, or lung disease.  They also excluded subjects who were missing data on physical activity, sitting time, body mass index (BMI), or smoking status.  Finally, to reduce the possibility that undiagnosed serious illness might interfere with physical activity, the researches excluded subjects who reported no daily life activities and no light housekeeping, as well as those who died from any cause during the first year of follow-up.  After the exclusions, the analysis included 123,216 subjects.

The primary outcome that the researchers looked at was death from any cause occuring between 1 year after study enrollment and December 31, 2006.  Time spent sitting and physical activity levels were assessed in the mailed questionnaire.  Sitting time was categorized as 0 to less than 3 hours per day, 3-5 hours per day, and 6 or more hours per day.  Hours spent in recreational physical activity was categorized into none, 1-3 hours per week, 4-6 hours per week, or 7 or more hours per week.  Daily life activities (gardening, housework, home repair, and shopping) were also assessed.  These were converted to Metabolic Equivalent (MET) scores, which give an estimate of the energy cost of an activity in relation to rest (for example, 3 METs means the activity requires three times as much energy as rest).  The recreational and life activity were combined into total leisure time physical activity.  The researchers then analyzed the relationships between sitting time, physical activity, and death rates, while adjusting for factors that can also affect risk of death (such as BMI, which is an indicator of body weight). 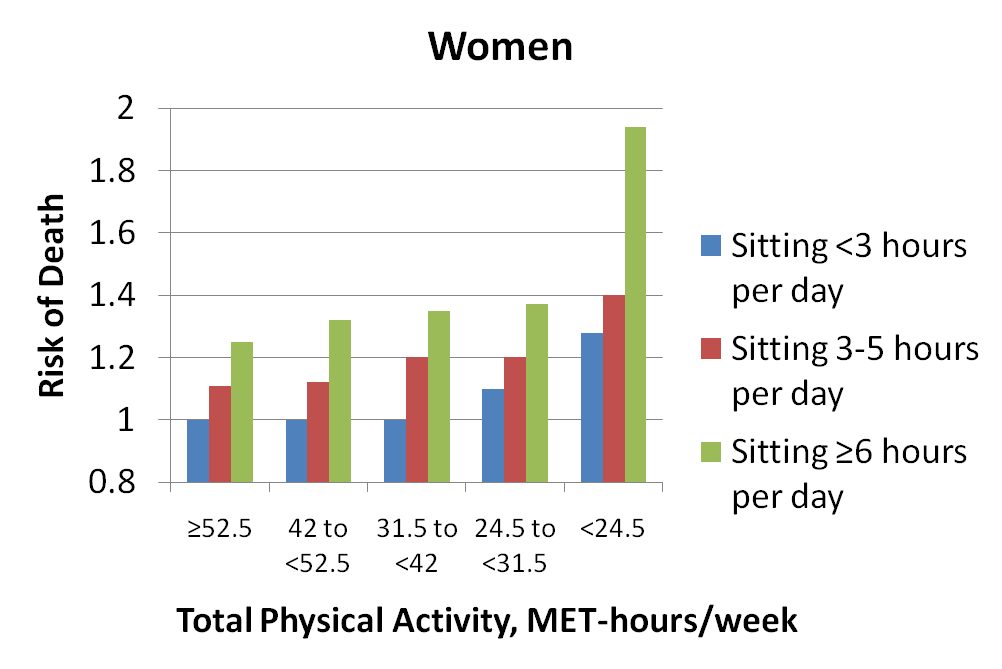 This chart shows that sitting 6 or more hours per day was associated with a greater risk of death at most physical activity levels in men.  Again, there is a progression in mortality risk as sitting time increases: 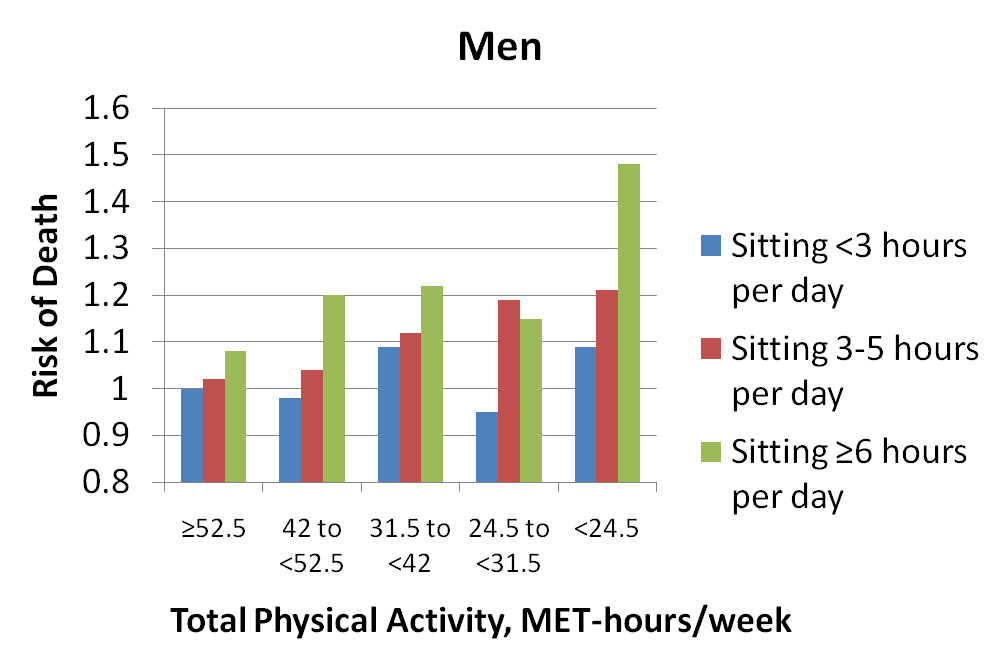 The researchers then broke the results down by BMI to see if the effects were specific to a particular BMI class (normal weight, overweight, or obese).  They found that both low physical activity and large amounts of sitting time were significantly associated with mortality in all BMI classes.  Thus, the relationship between sitting time and mortality is not because obese people (who have a higher risk of mortality) sit more often than lean people; sitting time is associated with increased mortality whether you are lean or obese.

This study demonstrates a clear association between prolonged sitting and increased risk of mortality.  Of course, this is an observational study and cannot establish cause and effect.  There always could be other underlying factors that may be responsible for the association.  Nevertheless, this is not the first study to show an association between sitting time and mortality/disease risk.  Another recent study showed an association between sitting time and mortality that, like the current study, was independent of leisure time physical activity.  Another study showed that total sedentary time, determined via accelerometers, was associated with blood sugar control; greater amounts of light activity was associated with better blood sugar control.  There is also research showing that self-reported TV time is associated with abnormal glucose metabolism and the metabolic syndrome.  Finally, a study published this year showed that more than 10 hours per week of riding in a car was associated with an 82% greater risk of dying from cardiovascular disease, and 23 hours per week of combined time from riding in a car and watching TV was associated with a 64% greater risk of death.

While this research cannot establish cause and effect, there are studies indicating that a cause/effect relationship between too much sitting and increased risk of disease and death is plausible.  For example, when you suspend the hindlimbs of rats to simulate sedentary behavior, the activity of the enzyme lipoprotein lipase (LPL) is suppressed in muscle.  This leads to an increase in triglycerides (the fat that floats around in your blood) and a decrease in high density lipoprotein (HDL) cholesterol (often known as your “good” cholesterol).  All that is needed to restore LPL activity is low intensity walking.  We also know that bed rest will cause insulin resistance in humans, which would ultimately lead to defects in blood sugar control.

Other than the fact that this was an observational study, a limitation is that physical activity, sitting time, height, weight, and other variables were assessed via self-report, and using a single questionnaire at that.  However, other studies using objective measurements of physical activity have found similar associations between sedentary behavior and metabolic risk.  A couple particular strengths of the current study were the very large sample size, and the fact the researchers controlled for a large number of potential confounding factors.

This study is an addition to the growing body of science known as inactivity physiology.  Similar to how exercise physiology is the study of how the body adapts to exercise, inactivity physiology is how the body adapts to prolonged inactivity.  It is becoming more clear that prolonged inactivity and low NEAT result in detrimental changes to the body that are not necessarily counteracted by a typical structured exercise program.  In other words, inactivity and a lack of exercise are different concepts.  Too many people think sedentary means lack of exercise, but instead sedentary means prolonged periods of inactivity.  The human body is meant to engage in regular movement, and when it is forced to be sedentary, such as with today’s office jobs and prolonged periods in front of TV’s and computers, there are adverse consequences to health.  It is becoming more and more evident that low NEAT has played a role in the increasing prevalence of obesity and metabolic disorders in our society.  In fact, sedentary jobs have increased by 83% since 1950, and physically active jobs now make up only 25% of our workforce.

Overall, there is enough data to indicate that too much sitting and sedentary behavior may be hazardous to your health in the long run, even if you engage in a regular structured exercise program.  It is very important to accumulate as much activity throughout the day as possible, whether or not you are a person who regularly hits the gym.  Again, this is why devices such as pedometers can be useful in giving you the feeedback necessary to help you accumulate activity throughout the day.  If you have a sedentary desk job, just getting up 5 minutes every hour to walk around can go a long way into helping you accumulate walking activity and reduce sitting time; in my new job where I work in a cubicle (which I had never done before), I have started doing this and it has not only helped me accumulate nearly 10,000 steps per day (in addition to parking off-site and walking to my workplace), but it has also helped me feel and concentrate better.

The bottom line is that you should get up and move around as much as possible.  This will dramatically increase your NEAT, which will help you in preventing both weight gain and the diseases, risks, and mortality associated with it.