In a previous issue of Weightology Weekly, I wrote about insulin and how it’s been unfairly demonized by many in the nutrition field.  This demonization has been based on a number of misconceptions regarding insulin, its biological effects, and its secretion.  I want to continue clarifying these misconceptions.

In my previous article, I discussed how dietary protein can cause insulin spikes just like dietary carbohydrate, and these spikes are not related to gluconeogenesis from the protein (i.e., the protein being converted to sugar).  I also showed how these spikes are partly responsible for the suppression of appetite that is caused by dietary protein (due to insulin’s effects on your brain to inhibit appetite).

There is a second phase that continues as long as glucose is elevated.  This release of insulin is achieved by the release of stored insulin, as well as the creation of new insulin (insulin is created from a precursor called proinsulin).  When you infuse glucose into the blood of healthy people and type 2 diabetics, you get insulin responses that look like this: 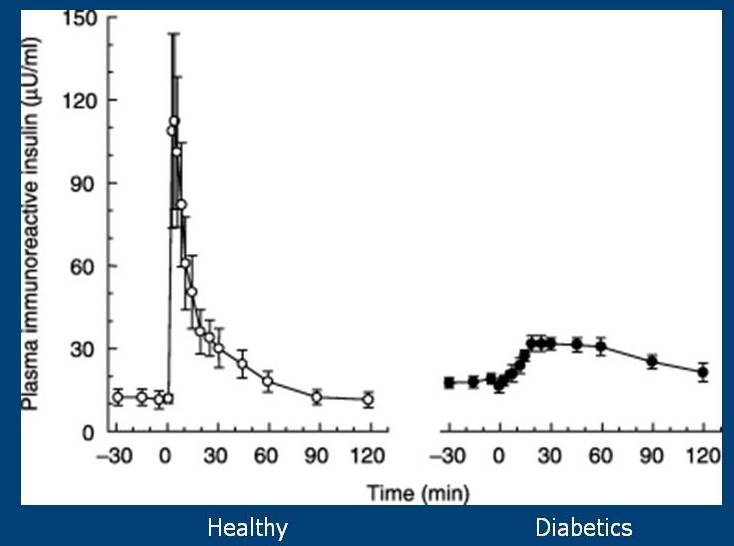 You can see that the diabetics completely lack the rapid phase response that is present in the healthy individuals.

There is a drug called exenatide (Byetta),  which has been found to restore this rapid phase insulin response in diabetics:

Many people like to blame obesity and weight gain on insulin, but exenatide, which restores insulin spikes in type 2 diabetics, causes weight loss: 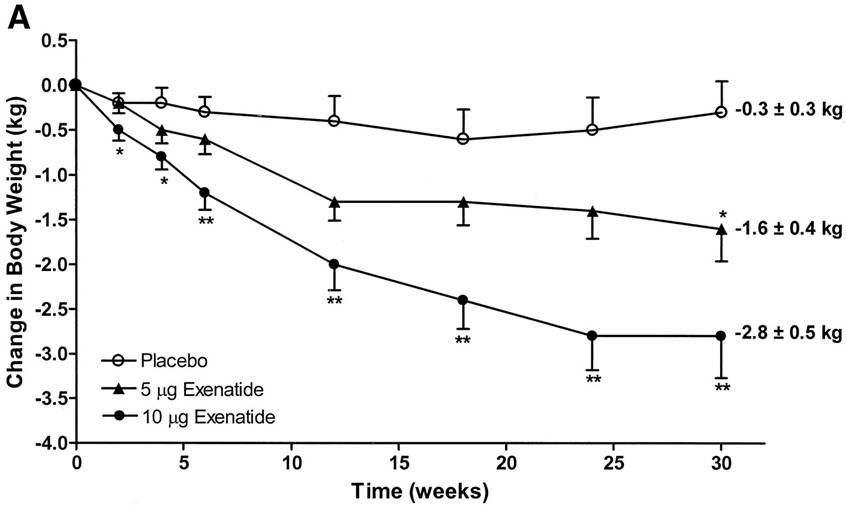 Part of this weight loss is due to an improvement in satiety.  Exenatide is a drug that mimics the effects of a hormone called glucagon-like peptide-1 (GLP-1).  GLP-1 is an intestinal insulin-stimulating hormone (known as an incretin).  GLP-1 potentiates insulin secretion, enhances the synthesis of insulin, upregulates insulin gene expression, and inhibits glucagon (insulin’s opposing hormone) secretion.  Yet Exenatide, which mimics GLP-1 and helps stimulate insulin secretion, causes weight loss.

MYTH:  Since diabetics who inject insulin gain weight, this means that insulin is the reason for weight gain in non-diabetics

FACT:  Amylin is co-secreted with insulin in non-diabetics; amylin has appetite suppressant and lipolytic effects

I would like to thank Dr. Stephan Guyenet for this information.  I had known about amylin but hadn’t looked into it in any great detail.  Amylin is a hormone that is secreted by your pancreas at the same time as insulin.  Amylin decreases appetite, and also stimulates lipolysis (the breakdown of fat into fatty acids).

Type 1 diabetics do not produce amylin, and amylin secretion is impaired in type 2 diabetics.  Pramlintide, a drug that mimics the effects of amylin, has been found to produce weight loss in diabetics.

This information demonstrates that the effects of insulin injection in a diabetic cannot be compared to the effects of physiological changes in insulin in a non-diabetic, yet many people erroneously make this comparison as if they are similar.

FACT:  Insulin Is One of the Many Hormones Critical to Satiety

I already most addressed this myth in my previous article on insulin, showing how protein stimulated insulin secretion and helped reduce appetite, and also showing how insulin injection into the brain reduces appetite.  I again want to thank Dr. Guyenet for this information, but when you knock out the insulin receptors of a mouse’s brain, the mouse will overeat and develop obesity.

MYTH:  All of this information only applies to healthy people

FACT:  The information applies to obesity and diabetes

On other forums, I saw people comment on my previous article and claim that the information I provided only applied to healthy people, and not diabetics or obese individuals.  They continued to believe that treating diabetes and obese individuals was all about insulin control.  Nothing could be further from the truth.  Not only is this evident from information mentioned earlier in this article (such as how exenatide restores insulin spikes and improves blood sugar control and body weight in diabetics), but it is also evident from the fact that high protein diets have been found to help both diabetics and obese individuals, despite the fact that protein is a powerful stimulus of insulin secretion.

As I mentioned earlier, people seem to confuse blood glucose control and insulin control.  It is the management of blood glucose itself that is partly responsible for the health benefits of low-glycemic carbohydrates, or reducing carbohydrates, or increasing protein intake, or consuming dietary fiber, or consuming fruits and vegetables, or consuming whole foods over processed foods.  It is not the control of insulin; the control of insulin ends up being a byproduct of these other behaviors through improvements in insulin sensitivity (how responsive your cells are to insulin) and reductions in blood sugar swings.

Remember, insulin is not the bad guy.  Click here to read part 3 of this series, where I discuss how dairy products are extremely insulinemic, yet do not promote weight gain.